What Are The Vegan Options At Wahlburgers? (Updated Guide) 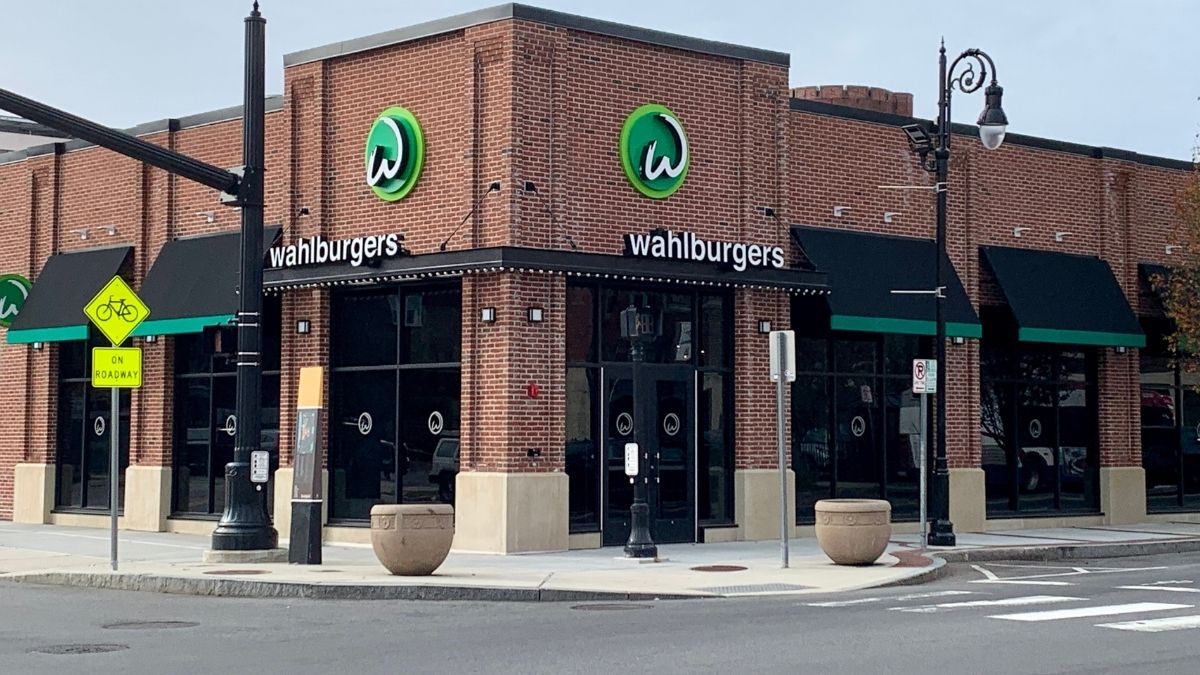 Wahlburgers began as a family business restaurant in 2011, and in the past ten years alone, they’ve already reached all over North America with 52 franchise locations and counting. This easily makes it one of the well-known burger restaurants in the country, but what makes this bar and restaurant chain more popular is that it’s run by celebrity brothers Mark and Donnie, with Paul Wahlberg as the executive chef. Wahlburgers is also a charitable organization working with Crescent Capital to help provide families and friends in need with fresh and delicious meals.

The Impossible Burger available in Wahlburgers is the talk of the show for vegetarians and vegans alike who’re wanting to grab a bite from the famous restaurant. They also have other vegan options and just about enough to give you a satisfying dinner.

I have to say, there are a few things you might want to know about the diner before paying a visit though.

Right off the bat, the ear-tingling, mouth-watering Impossible Burger isn’t an exclusive from Wahlburgers, but It’s a given name to the product itself and generally for some vegan burgers available from other restaurants. It’s simply a burger patty that tastes like meat but is made with plant-based ingredients. Usually served with smoked cheddar cheese, chili-spiced tomatoes, lettuce, caramelized onions, and the signature Wahl sauce to finish, this burger can be made vegan upon request.

Yes, I know, vegans are always worried about what’s in the buns of “vegan” or plant-based burgers and sandwiches, but I dare tell you that there’s nothing to worry about that with the Impossible Burger at Wahlburgers.

They offer vegan buns void of eggs and dairy allergens, and they will also generously rid the Wahl sauce and make sure that their plant-based cooking surface is thoroughly wiped down and clear of animal-based contaminants, otherwise they’d cook it in a separate station. However, it’s best to know that not all of their franchise locations offer vegan buns, so be sure to check in with their kitchen before ordering.

Still, if you’re feeling too wary or unsure about the buns, then ordering the Impossible Burger without the buns, cheese, and sauce may be ideal. It’s still pretty good though, and healthy too! Plus, you get 230 cal less from the original 680 cal burger. Talk about a good diet.

They also offer some gluten-free buns, but they’re not vegan, so there’s no point in ordering that.

The burger patty comes from Impossible Foods company and is absolutely plant-based using soy and potato proteins, heme, yeast extract, coconut and sunflower oils, food starch, and methylcellulose. Woah, what are those?

The other ingredients are pretty basic, but heme and methylcellulose may have called for your curiosity. The heme in our blood cells is attached to an iron atom that helps carry oxygen throughout our bodies, but more than that, heme is also responsible for the meaty taste of flesh that people enjoy. In plants, on the other hand, heme proteins are responsible for the transport of nitrogen for nutrition. So what makes heme so special in a vegan burger?

Just as how meat heme gives savor to meat, plant heme or soy leghemoglobin does the same for plant-based meats. Switching over to a vegan diet, you really can’t deny that you sometimes miss the meaty flavors of burgers and sandwiches, well, thanks to the heme in the Impossible Foods burger patty, you can enjoy that thrill once again with a much cleaner, healthier, plant-based alternative.

Next comes methylcellulose, it sounds very scientific, but there’s no need to turnover with this jargon. The last half of its name, cellulose, signifies that it comes to form the pulpy part of a plant’s cell walls, meaning to say that it is already 100% plant-based. More so, methylcellulose doesn’t have any nutritional value, it’s just an additive to bulk up processed foods. It doesn’t give off any taste either and usually comes as a white powder after manufacturing.

Methylcellulose is also an active ingredient in most laxatives, but it’s commonly used in trace amounts both for food and medicinal products. If you’re sensitive to laxatives, it’s best to watch out for this ingredient in other consumables. For more info on the laxative effects of methylcellulose, look it up here on Everyday Health.

This plant-based “meat” patty is the main event with the Impossible Burger products that you’d find in Wahlburgers and other restaurants that offer vegan burgers, and it is invented and produced by Impossible Foods company which is an organization dedicated to creating the healthiest, non-animal-based food and ingredients out there. The Impossible Burger is their first product but it’s only one of their many others.

Other Vegan Options At Wahlburgers

There’s not a lot, but the other vegan sides would do well with the Impossible Burger, and they’re pretty satisfactory.

The tots are cooked in a separate fryer from their meats and so you don’t have to worry about that. Also, keep in mind that they don’t put up any allergen info on their menu options so be sure to check that out with your server.

The portobello mushroom sandwich which was a popular vegan option from Wahlburgers isn’t listed any more in their main menu, so thumbs down on that.

Like I said before, Wahlburgers is not the only diner in town serving the Impossible Burger as a top-choice vegan “meat.” Honestly speaking, as you’d expect from a celebrity-owned restaurant chain, the menu gets on the more expensive side. If you’re tight on a budget or you just don’t see the point in buying a $15 burger that tastes pretty much the same as an $8 burger from another diner’s menu, then you might want to look up these other burger restaurants that offer the Impossible Burger and other vegan choices.

With the help of PETA‘s recent article on the best vegan burger places, here’s the list that we’ve come up with:

Bareburger offers one of the top-class vegan burgers menus in the market, with a variety of plant-based burgers to choose from, the privilege to customize your burger with vegan buns and sauces, and the plethora of delicious vegan options and beverages, this should easily top your list of favorite vegan restaurants. They’ve got 37 locations scattered across the east coast, with the majority being in New York. Their Impossible Burger option is also called their Original Vegan burger served with sprout buns and organic garlic aioli.

Burger 21 has a black bean vegan patty and also the impossible burger, and both can be served with optional buns and sauces. They’ve got vegan wheat and lettuce buns. Guacamole and Thai ketchup are available sauces. They’re available in a lot of the states including Georgia, New York, and Florida where most of their locations are. So you’re definitely going to cross a few of them while you travel around.

BurgerFi offers a delicious 100% vegan burger using the Beyond Burger patty from Beyond Meat and sandwiched between two multi-grain vegan buns. They’ve also got the VegeFi burger which is their award-winning original recipe, but don’t be nuanced by it as the patty contains cheese, so it’s vegetarian, not vegan.

The self-proclaimed king of burgers, of course, would want to live up to their name and so they introduced the Impossible Whopper to welcome in the growing vegetarian and vegan communities. The Impossible Whopper is their take on the impossible burger patty with basically the same ingredients as with other restaurants, and they can also separate your vegan dishes from meat-present surfaces and methods upon request. The sesame seed bun is vegan, but it doesn’t come with any vegan cheese or mayo.

Habit Burger Grill got a whopping 265 locations across the country offering vegan patties with most of them being in sunny-side California, so it’s almost impossible to miss out on this big guy. The other eight locations in Santa Barbara County however do not yet offer vegan delights for some unknown reasons. So, if you’re close there, don’t take my word for it, you can go ahead and check on their offers just to be sure.

Alright, so they’ve got the Original Impossible burger on their menu but it is typically served with mayonnaise and cheese, so be sure to inform them to get rid of that to make it 100% vegan. What’s best about this restaurant menu in my opinion is that they put up allergen and nutrition tables on their website and menu.

The Original Impossible Burger is one of their heaviest char burgers at a serving size of 381 g but with only 530 cal, 29 g of total fats, 46 g carbs, and 20 g of protein. It’s also the ace for vitamin-A at 50% and good iron for the blood at 40%. The allergen info says may contain gluten, soy, and eggs, but without the mayo, then goes the egg allergen.

To Top It Up

Then at the end, Wahlburgers is a pretty good place with a friendly ambiance and the vegan-special Impossible Burger with satisfying sides, but, as we’ve seen already that the menu is very limited for vegans, the taste is good but quite average, and not to say that the options are leaning on the expensive side. If you love one or all of the Wahlberg brothers then this bar and restaurant might be one of your favorite burger places, but if not, well, that’s all I’d tell you.

Obviously, there are a ton of other burger restaurants, especially Bareburgers who already has a fully-devoted vegan menu with a myriad of choices and combinations. Habit Burger Grill is really good too and very keen on your dietary restrictions. So, at the end of the day, it’s all up to you which burger from whatever restaurant suits you best. Those were just factual opinions but no matter the recipe and makeup of your vegan burger, always eat what you love and love what you eat.