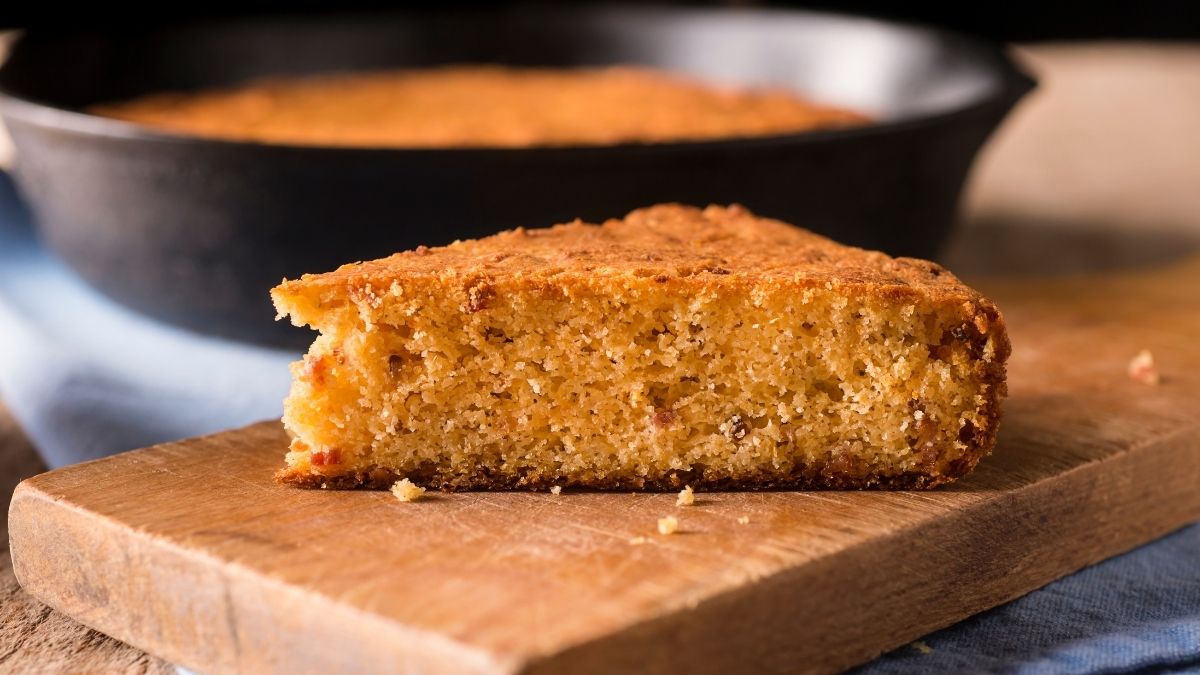 The holidays are here and so are the plethora of mouthwatering, cornmeal delights. Hoecakes, spoon bread, hush puppies, and cornbread are all variant delicacies made from cornmeal, a mix of flour, and other emulsifiers, leaveners, and shorteners. Although these types of bread are popular and perhaps a favorite of yours before you switched over to a vegan lifestyle, can they be once again redeemed for the sake of your craving appetite?

Generally, cornbread mixes are non-vegan because they contain traditional ingredients such as milk, eggs, and butter, which play vital roles in the proper preparation of cornbread. Through my research, I did find one vegan-friendly brand, and there are also dozens of recipes out there to guide you in making your own “best” vegan cornbread.

After all, who could simply get away from the steaming, fragrant aroma of freshly-baked cornbread, and the sound of the slightly crunching texture of the loaf when sliced. Everything about cornbread just seems to call out to you, right?

As I’ve said, there are non-vegan ingredients in traditional cornbread that are necessary to the preparation, but they are not at all irreplaceable. So to start off, let’s first take a look at what makes most cornbread mixes and traditional ones non-vegan-friendly.

Authentic southern cornbread especially makes full use of milk or buttermilk, because it’s either of these two that induces the sweet, mellow tangy flavor as well as the smooth, buttery texture of the bread. Buttermilk also contains fatty acids that aid in the leavening process since yeast is not present in gluten-free cornmeal.

However, these ingredients can be easily replaced with plant-based milk such as oat milk or almond milk. To aid the leavening, use baking powder (which is 100% vegan) instead of baking soda (baking powder already had an acidic component that activates in liquid) and there’d barely be any difference with the taste and texture.

For the vegan buttermilk, you can use oat milk together with apple cider vinegar or white vinegar to curdle the milk and give it a nice, tangy complexion. If you choose to use vegan buttermilk, then baking soda would be as fine as baking powder.

Egg Proteins Bind The Ingredients Together

It’s no mystery why eggs are as staple as milk in traditional baking, and this is primarily because of the proteins and fats contained in the egg that act as binders and emulsifiers. The white of the egg mostly contains the necessary proteins that when whipped, become a blanket that traps in air bubbles like CO2 from the acid-base reaction of baking soda and acid or baking powder and water, which then leads to the leavening action of the batter. The egg yolks contain fats and lecithin that act as emulsifiers that bind the wet and dry ingredients together with perfect consistency and uniformity throughout the mix.

Seeing just how important eggs are in baking, makes it a little daunting for vegans to figure out an effective substitute, but worry not my friend, it’s not impossible at all.

Corn is already gluten-free, and since it doesn’t contain natural yeast nor binding proteins that would make cornbread rise and stay cohesive, we would need a binder and emulsifier that are just as effective as eggs. Apparently, Bob’s Red Mill egg replacers and flaxseed eggs are great solutions to your predicament.

Bob’s Red Mill egg replacers are made with four simple ingredients: potato starch, tapioca flour, baking soda, and psyllium husk fiber. It’s completely gluten-free and comes as a powder that can be mixed with water. The emulsifying and thickening properties of this product are just like that of a real egg but come with a few limitations.

Flaxseed eggs are made of one tablespoon of ground flaxseed and three tablespoons of water. This makes one serving that is equal to one whole egg with fewer calories, cholesterol, and protein but high in soluble fiber and omega-3 acids that are great for heart health, making it a very nutritious substitute for egg.

One thing you should note about flaxseed eggs is that their emulsifying abilities are quite meager and unfitting for most gluten-free flour such as cornmeal. So, why do I recommend it? Well, because those can be easily fixed if you use a half-cornmeal, half-wheat flour variety for your cornbread. Flaxseed eggs work best with quick-bread recipes from wheat or oat flours, and the outcome is still very delicious and nutritious. A complete guide to flaxseed eggs can be found in this highly informational article.

Basically, if you want a 100% cornmeal-based cornbread, use Bob’s Red Mill eggs, but if you’re okay with the half-cornmeal, half-wheat type, then flaxseed eggs would also be a good option.

Butter can be added in or on most cornbread recipes, and when it’s added in, it gives a salty, buttery taste to the bread and also adds a bit of moisture to the crumbly structure. It can also be smeared on the surface of the bread and drizzled with maple syrup. Whether you like mixing it in with your wet ingredients or slathering it onto the baked bread, butter is special for its identifiable flavor and texture.

The good news is that vegan butter is not hard to come by. There are a lot of great substitutes such as margarine and vegetable oil shortening, and you can also make it yourself. Nut-free, soy-free, dairy-free butter recipes are all around like Christmas lights in December.

Animal shortening, or lard, comes from hog fat and creates a distinct taste and structure in the southern-style cornbread recipe, but for vegans, replacing animal lard with vegetable oil like sunflower and canola, or otherwise, vegan butter, makes animal-free cornbread just as good and heavenly, also healthier. Lard contains high amounts of saturated fat which aren’t healthy as they stick around the body as extra cholesterol.

Man, just looking at the ingredients is enough reason for me to always make my cornbread homemade instead or with a vegan version that has much fewer preservatives and chemicals in it.

I’ve checked out all the ingredients and allergen info on this particular mix and I’m very happy to assure you that it’s vegan-friendly. According to an honest article from All Recipes, Open Nature Gluten-free is by far the best gluten-free brand in the market because it is very affordable, neutrally sweet, voluminous, non-GMO, fat-free, and also doesn’t contain too many complicated ingredients.

That’s all the ingredients in the ready-mix, and although they do advise you to use non-vegan ingredients to make the batter, once again, those can be easily replaced, no problem at all. Flaxseed eggs would be very effective for this product as it already contains most of the basic binding and leavening ingredients of Bob’s Red Mill eggs.

However, Open Nature’s Gluten-free cornbread mix is quite dry when baked, and so I advise you to pour in a generous amount of vegan milk or butter so you can achieve the smooth, moist, and buttery texture you love.

I’d tell you straight away that Jiffy’s cornbread isn’t healthy, and a much better option would be to make your own vegan cornbread from highly-rated recipes online or grab a pack of Open Nature’s Gluten-Free Cornbread mix and bake it with flaxseed egg, almond buttermilk, and vegan butter.

Though vegan cornbread has fewer calories, carbs, and saturated fats than the traditional ones, it also sacrifices protein content, but that shouldn’t be a problem at all since cornbread isn’t meant to be a protein bar anyway. Cornbread is still bread and whether you like it sweet or not, with chili or none, it’s all up to you because there are so many ways to tweak the original recipe according to your dietary preferences.

Cornbread is relatively high in carbs with can spike blood sugar levels in excess, but since it’s mostly paired with savory, low-carb dishes, it makes up for a well-balanced diet. There’s no absolute nutrition table with cornbread especially when you try to make it vegan. You can use flax eggs (2-3 g protein per serving) for lower carbs and calories with a good amount of healthy fatty acids. You can even use applesauce or bananas instead to give the bread a much sweeter flavor and moist texture. You can use organic cane sugar or stevia extract when you’re cutting on sugars. You can use almond, soy, oat, and even traces of coconut milk in your custom batter.

The recipes are endless, and the health benefits you can reap from homemade cornbread ultimately depends on you, but always remember, too much of anything isn’t always good.

So at the end of the day, almost 99% of branded cornbread mixes in our stores are non-vegan because they contain trace amounts of eggs, milk, and butter, but one product gets into the 1% class and that is Open Nature Gluten-Free Cornbread mix. However, if you’re still wary of the traditionally packed cornbread instant mixes, then feel free to make a recipe of your own or find a recipe online that you like.

You can also make the other variants of cornbread with the same vegan ingredients that I’ve recommended here and I can assure you that they will turn out well as long as you pay careful attention to your ingredients and preparations. Jessica in the Kitchen has a pretty interesting recipe of cornbread and also a few good tweaks here and there that would help you fashion your desired version. However you make your cornbread, always remember to eat what you enjoy, and enjoy what you eat.