What Are The Vegan Options At Freshii? (Updated Guide) 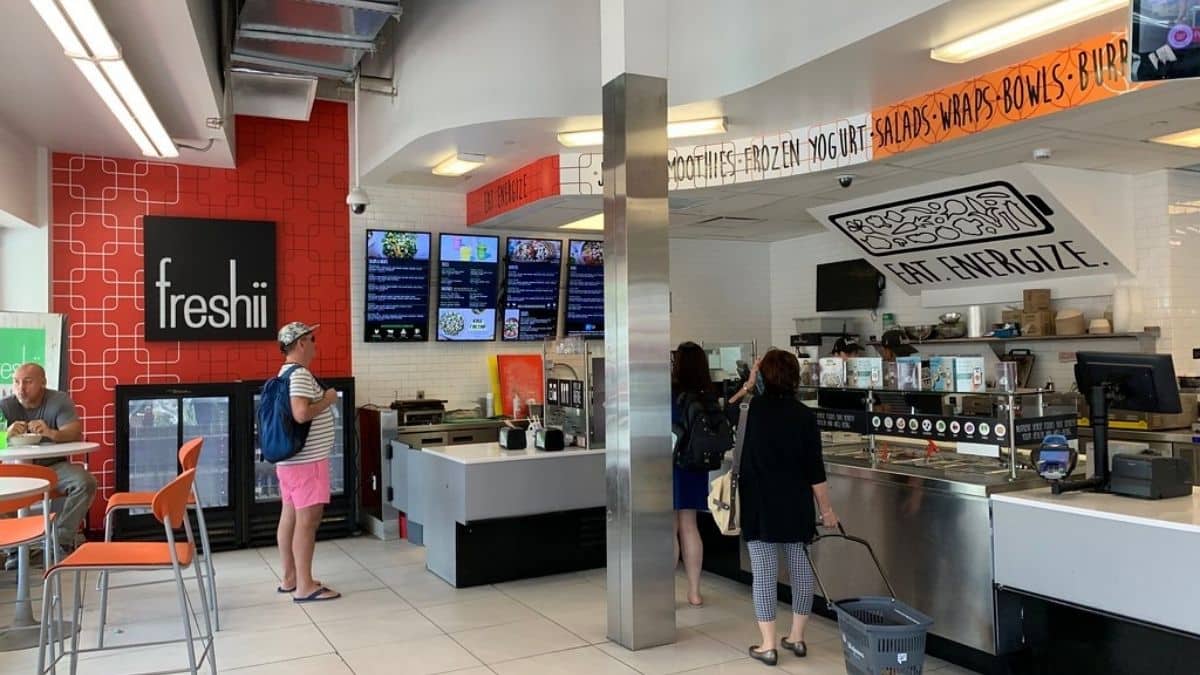 A restaurant named Freshii must have vegan options, right? That’s what you likely told yourself when you first heard the name or drove past the sign. If you’re like me, anytime a new restaurant opens, you get excited if it sounds remotely healthy or vegetarian in the hopes that it has some vegan options. Alas, it doesn’t always work that way, and that’s why, like you, I jump on my phone to see what the reviews are or if anyone has written something that can help us, vegans. This article will share what I’ve uncovered about Freshii and what vegan options it offers.

Freshii serves soups, burritos, bowls, wraps, juices, and smoothies. The place isn’t tailor-made for vegans, but there are plenty of vegan options to choose from. Even though 50% of the menu is plant-based, you still have to be careful with your order.

Some items on the menu may seem to be vegan but aren’t. Read on to find out what you should order to keep it 100% vegan.

When Mathew Corrin started Freshii in 2005, he probably didn’t anticipate such a grand success. What was a single location in Toronto, Canada, is now a franchise that can be found in over 80 cities and 20 countries.

On a mission to offer people healthy fast food, Freshii is a great option for those who want to eat healthy on a budget. Every location prepares its food daily to ensure that all of the ingredients are of the freshest quality. It’s a plant-forward concept that offers food that’s rich in vitamins and nutrients. Better still, each location partners with local farmer’s markets to support the community and ensure that the products aren’t mass-produced.

How Is It Prepared?

According to Freshii’s resident nutritionist, Andie Shapira, all vegan items are prepared away from animal-based ingredients. Furthermore, she states that they wash all utensils and cutting boards after each use. Keeping things separated ensures that you don’t accidentally get a piece of bacon in your vegan salad. Pretty neat, right?

Can I Order Anything On The Menu?

No. Even though the menu is 50% plant-based, Freshii has animal products in the kitchen. They also have a long list of dairy products. The more obvious is cheese; the more disguised is in a large number of sauces.

What Should A Vegan Order?

While most Freshii restaurants are compact, their menu isn’t. You’ll find it overwhelming when you have a look at it. Indeed, you’ll be saying, “wow, where do I start?” Instead of trusting the person behind the counter, you have to do your research to be sure if it’s vegan-friendly. Even though the vegan movement has grown tremendously in the last decade, many casuals aren’t aware of what a vegan diet consists of. Fear not, I’ve done the work for you! Let’s look at each section on Freshii’s menu.

Freshii offers six choices of salads and wraps. Only one of the six options is vegan. You can ask to make any salad or wrap vegan, but if you want to keep it simple and decrease the chances of a mistake in your order, you can order the Umamii salad, which is 100% vegan. What’s in it? Fresh kale, brown rice, creamy avocado, edamame, mushrooms, cucumber, cabbage, carrots, hemp seeds, and ginger miso dressing. The wraps are made from whole wheat tortilla or collard green. The latter makes it gluten-free, low in carbs and calories.

The menu has ten different bowls and burritos available. The ingredients are the same for both; the only difference is the wrap. Again, you can choose between whole wheat or collard green. There are four vegan choices: Teriyaki Twist, Buddha’s Satay, Baja, and Khao San. Each one has its style; each one is equally delicious.

When you need something to warm you up or feel like having a light meal, Freshii has delicious soups. They have four choices on the menu, two of which are vegan. You can choose between Spicy Lemongrass (veg.) or Superfood. Both contain less than 300 calories, are high in protein and fiber, and keep you full and energized throughout the day.

According to Freshii’s nutrition and allergen guide, none of the smoothies are vegan. I know, such crushing disappointment, but don’t despair; the juices are here to save the day!

Freshii offers seven juices that you can grab from the cooler. And guess what? All of them are vegan except for the Immune Elixir, which contains honey. The other juices are all vegan and exquisite; try not to grab them all at once!

Forget about all three available treats. None of them are vegan. Sad, we’ll have to dry our tears and take our sweet tooth elsewhere.

You’ll be surprised to find out that Freshii doesn’t have any vegan options for breakfast. It seems quite strange, but you’ll have to skip Freshii’s breakfast. Every item on the list contains eggs or milk. Oh well, who needs breakfast anyway?

If you like to order from the little guys’ menu, vegans will have to pass on this one. All six items are off-limits to vegans.

If you’re looking to add a little boost to your meal, you can check out the protein list. It has a total of four options, two of which are vegan. You can have tofu and falafel to give your meal a little more humph.

When you see that a dish is composed of plant-based ingredients, you feel confident that it could be vegan. But wait, here comes the dressing! It can mark the end of a beautiful salad before you have a chance to say, “what’s in that dressing?”

As a vegan, you have to anticipate by asking the right questions. You have to make sure that dairy, mayonnaise, or honey aren’t part of the mixture to pass the vegan test. Thankfully, Freshii offers a massive number of vegan dressing options. The list is long and mighty tasty:

Almost every meal at Freshii starts with a base ingredient. The good news is that you don’t have to worry about any of them since all of the bases are 100% vegan!

Freshii has a long list of toppings for vegans. Of the thirty-plus available toppings, only five of them aren’t vegan. Be sure to stay away from:

Everything else in the topping section is fair game!

Freshii isn’t a place where vegans can blindly order anything from the menu. True, it’s a great place to find plant-based food, but it’s far from fully vegan. Still, vegan can make Freshii their new favorite fast-casual restaurant because it cares and acknowledges that vegan diets are just as important as any other diet. In this regard, Freshii can be an example for other restaurants.

Restaurant kitchens can be messy and difficult to trust. When a place states that they offer vegan options, you’re never fully convinced that your vegan patty wasn’t made in the same workspace as a beef patty. You can find comfort in knowing that Freshii keeps animal-based products separated from vegan products.

Freshii has many vegan options. You can choose from a wide selection of salads, wraps, bowls, burritos, soups, and juices. You can even boost your meal with proteins and make your salads taste amazing with various dressings and sauces.

Unfortunately, you will have to stay away from smoothies, sweet treats, breakfast items, and the kid’s menu. But compared to most places, it’s pretty good.

In conclusion, Freshii is a place that caters to everyone, vegans included. Their menu is 50% plant-based, making it a healthy option when you need a quick bite to eat.