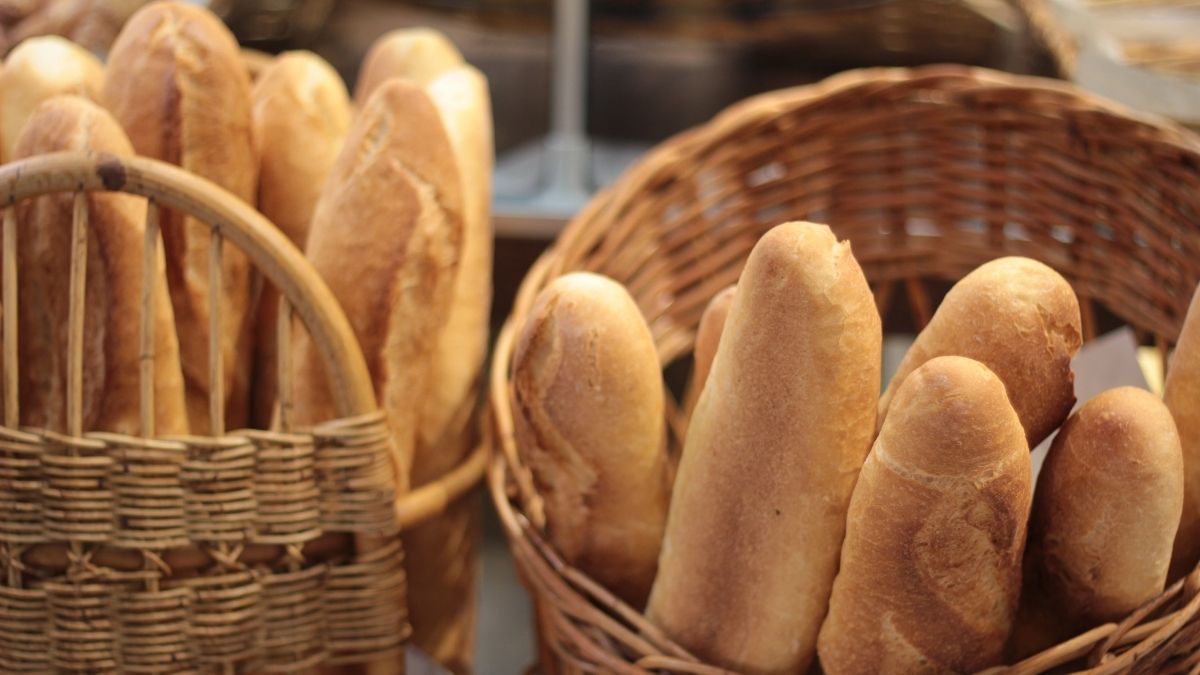 The term “French bread” may refer to a generalization of a wide array of bread from France, but for the rest of the world, French bread is most synonymous with “baguette”. A long, thin, and crusty bread that gives off a unique aroma and crunchy taste, the baguette has been so popular worldwide that it became one of the most iconic items from France. (French fries, anyone?)

To our greatest joy, French bread, like most bread, is vegan-friendly and can be enjoyed with vegan butter amongst other toppings. Traditional French bread only has a few ingredients being salt, water, yeast, and flour. Milk and eggs are usually unnecessary for the process of baking French bread, but other variants may contain non-vegan ingredients.

Here, we will discuss a few other examples of French bread but with baguettes as the main topic. Then we’ll be looking over to its basic ingredients, preparation, and finally a list of good-quality, vegan-friendly, store-bought baguettes. (That was a lot of hyphens!)

Even though the baguette seems to be the most popular French bread in the world, this doesn’t mean that others are inferior to it. So here are a few popular ones that are also available in the US.

I’ll be using French bread and baguettes interchangeably throughout the article unless said otherwise.

The “baguette de tradition francaise” is made simply from wheat flour, water, yeast, and table salt, though it may contain traces of broad bean flour (2%), soy flour (0.5%), and wheat malt flour (0.3%). Even though the traditional baguette only contains four main ingredients, the unique texture, taste, and aroma of the baguette naturally come from the fermentation of yeast.

Yeast is a single-cell organism, Saccharomyces cerevisiae, that converts sugar and starch into CO2 and edible alcohol. The CO2 is what makes the dough rise, while alcohols obtained from yeast are used in common beer. However, a specific yeast known as baker’s yeast is what’s used as a leavening agent, and it also comes in two variants – fresh and dry. Dry yeast is what’s commonly used today because of its longer shelf life.

Instant yeast is a very fine dry yeast and is used in making baguettes because it can be activated immediately after adding it to the ingredients This trait of instant yeast is very important especially if the dough requires careful kneading prior to cooking, as is the process of French bread.

Instant yeast also contains enzymes that act as catalysts to break down sugar and starch much easier, making the bread rise and cook faster. The enzymes present in yeast are maltase and invertase, and these enzymes occur naturally to speed up the yeast’s metabolism.

Just as how natural enzymes in our body help us digest our food, so do these enzymes in flour (amylase) and yeast (maltose). This simply means that they are vegan-friendly since they don’t have to come from animal-based products. Although yeast is technically a living organism, that’s a whole another story.

Some enzymes (like pepsin) in food are marked by PETA as non-vegan ingredients, and you can check them out here.

You already know how without yeast, bread and dough won’t rise when cooked, but yeast also affects the taste and aroma of French bread. The Maillard (muh-lard) reaction is also responsible for the golden brown attractiveness of baked goods among other foods. In French bread, the Maillard reaction comes after yeast fermentation, when heat is finally introduced to the dough.

Starches aren’t very flavorful by themselves, but as yeast breaks them down into simpler sugars, it produces byproducts such as amino acids, that when react with sugars, incorporate a unique taste to the dough that wasn’t present before. Continuous kneading creates stronger bonds between the proteins and sugars in the dough, and when finally exposed to heat, the flavors and aromas from the Maillard reactions burst forth, and thus also cause the browning.

These aromatic esters are released within the slightest heat range (41° F) and give off pungent odors in bread that may slightly resemble that of beer, but if the beer-like scent is too strong, it is a sign of excess fermentation in the dough. Normally, no more than 2% of ethanol should be present in bread after fermentation.

However, French bread is also very susceptible to staling. Staling occurs as starch molecules realign themselves into rigid, crystalline structures due to dehydration and cool temperatures. Since water is used in kneading the bread and not oil, they tend to stale relatively fast.

No, traditional and store-bought French bread isn’t gluten-free because gluten plays a vital role in the cohesion of the dough when being kneaded. Basically, baguettes achieve their distinct, strong shape because of gluten and yeast. Gluten holds in the CO2 emissions from yeast fermentation tightly so that the bread becomes stronger and more elastic. The more gluten is produced in the dough, the more manageable and crisp the bread will be.

Yes, baguettes nowadays are more commonly produced with enriched flour that contains essential vitamins and minerals good for the heart, energy, immunity, and avoiding deficiencies. French bread is still made of carbs more than other macronutrients, so it should be eaten as a part of a well-balanced diet. Vegan butter on a baguette, sprinkled with nutritious seeds like sesame or flax, and coupled with some protein-rich beans would be a very delightful and healthy meal.

Since most French bread and baguettes are already vegan, you don’t have to be too picky at the grocery, there are a few ingredients you have to watch out for though. Mono and diglycerides are used as emulsifiers when oil and water are present in a recipe. They’re common in manufactured pastries and bread because they improve the texture and consistency of the dough, slow the staling process, reduce stickiness, and prevent oil from separating. Basically, they have added preservatives.

Monoglycerides are fats obtained from either plant-based or animal-based oils, and seeing them on the ingredients lists of food products doesn’t exactly tell you where they came from. The only way to be sure is to contact the manufacturer, but according to Healthline, vegans and vegetarians may want to avoid (but not necessarily) products with mono- and diglycerides just to be on the safer side.

So, without further ado, here’s a list of vegan-friendly baguettes:

Like I’ve said, most French bread is already vegan and the ones stated above are just a few out of dozens of examples, but you also have to be wary that mono and diglycerides in baguettes may or may not come from animals, and these types of bread may also contain traces of milk and egg contaminants due to the possible use of shared equipment.

However, if you’re okay with that, then there’s no problem at all, but if you’re a stricter vegan and cannot or do not tolerate such, then that’s completely up to you. There’s no need to be nagging at each other at this point as PETA also discourages vegans from being too strict with such minuscule details as this actually makes it seem to other people that veganism is too dogmatic and difficult to live out which makes them less interested or inclined into joining the cause (which really does hurt animals.)

Being vegan shouldn’t be hard at all, and we’re already very thankful that most bread out there including the marvelous baguette is naturally vegan-friendly. Though bakery and factory-made baguettes may contain the slightest amount of contaminants due to shared handling, this shouldn’t be too big of a deal for you as it is the world that we live in, for now. The true goal of leading a vegan lifestyle is to point others to cruelty-free, healthy, earth-friendly living, beginning from a dietary discipline.

So that’s it for this article and I hope you learned a few values both on French bread and the awesome vegan life.