What Are The Vegan Options At Hibachi? (Updated Guide) 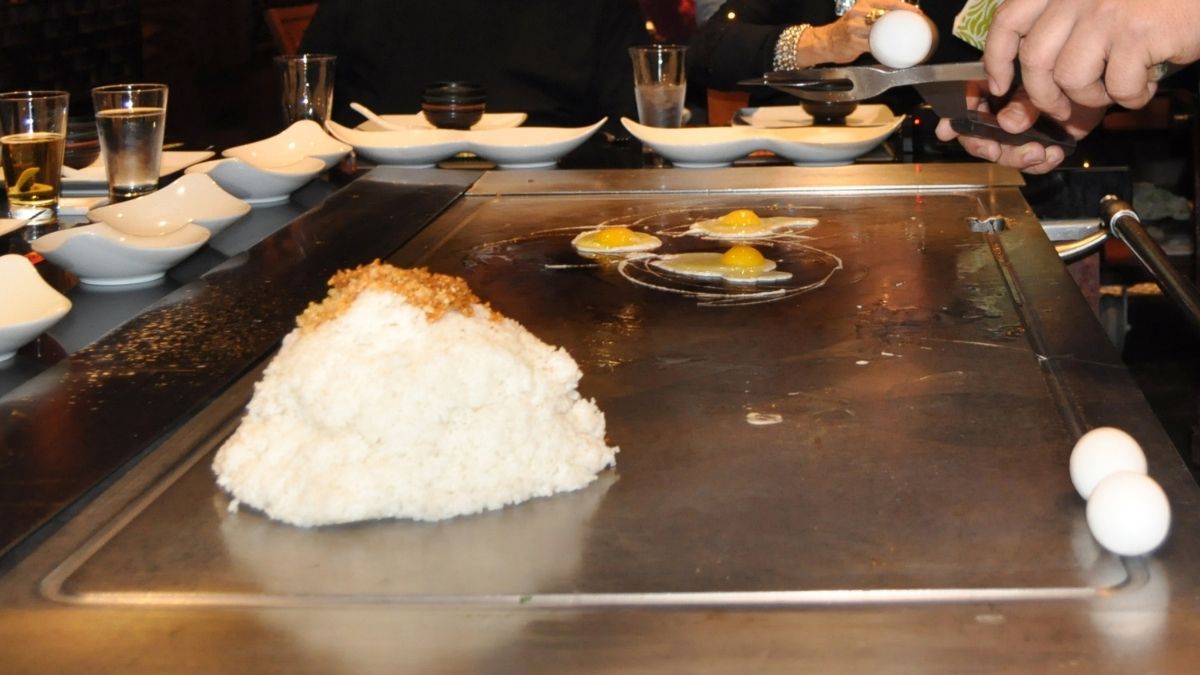 However, it is always good to be aware of the vegan options at a Hibachi restaurant. As we all know, the sauces used by Japanese cuisine sometimes contain fish extracts.

Want to know what those vegan Hibachi recipes would blow your mind? Stick to this piece till the end to feed your curiosity!

What Are Hibachi Restaurants All About?

Hibachi is a Japanese style of preparing meat and exotic plates of seafood. The Hibachi way incorporates a unique cooking methodology. Often, it involves a heated metal surface placed over burning charcoal. They use ceramic containers to put the burning wood and charcoal. That’s how their meat gets its smoky and mouth-watering flavor.

The word hibachi means fire bowl. Hibachi is like grilling meat but with a different cooking method. Hibachi food is also spicier than regular grilled food.

Apart from delicious finger-licking dishes, you will enjoy the cooking display at Hibachi restaurants. The chefs will cook right at your table, or you may visit the countertop to see them cook. These Japanese-styled chef masters are skilled in their art. With years of experience under their belt, they know how to entertain their customers too.

Seafood platters include lobsters, scallops, and tuna — all prepared intricately to perfection. Meat items like chicken and lambs are among their best sellers. They also pay good heed to the vegans out there. So, vegan options are also available at Hibachi restaurants.

How Many Vegan Options Do Hibachi Restaurants Offer?

However, the number of options is limited and is not as extensive as the meat lovers’ menu. Still, you can find perfect satisfaction with some knowledge of what to choose!

It is a perfect balance of smooth and crispy texture. Tossed seasoned veggies with Kobe noodles in vegan butter, garlic, and soy sauce is probably the best guilt-free item at the Hibachi restaurants.

Vegan tofu stir-fry noodles are gluten-free, and what more could you probably ask for?

Hibachis serve vegan tofu stir-fry noodles with the famous and delicious miso soup. You get a fresh green salad bowl as a side too. Next time you’re there, don’t forget to try this delicious dish.

This is a must-order for all the vegan rice lovers out there. It combines seasonal fresh veggies and rice tossed in vegan butter, garlic, and soy sauce.

You can stay assured that this gluten-free fried rice is perfect for vegans. It, too, is served with smooth miso soup and crunchy green salads.

The key ingredient to this is seaweed. Besides its crunchy texture and great taste, seaweed is good for your health. Sesame seaweed salad comprises seaweed, sesame seeds, vinegar, lemon, onion, garlic, and cucumber.

You can opt for this vegan salad as a side dish with the main course at Hibachi restaurants, and you won’t regret it.

What Should You Keep In Mind While You’re At A Hibachi Restaurant?

There are two major things to remember before going to Hibachi restaurants as a vegan. The points are given below for your convenience.

While enjoying the food at Hibachi restaurants, often, people forget about the ingredients used in the dish. Vegans, too, face similar problems. The Japanese names of the ingredients are not known to the American audience. Hence, sometimes they end up eating the undesired dish.

It is always wise to know the ingredients before ordering any dish at a Hibachi restaurant. After all, ordering food and tasting something undesired or non-vegan is a nightmare.

You can resolve it at home by going through the restaurant’s menu available on the internet. Else, you can call the manager and ask about the vegan dishes, rather than appearing directly at the place.

Knowing the right ingredients and their popular names will also help you gain information as a food enthusiast. Later, you won’t need to hesitate in other restaurants to do the same search work repeatedly.

Some key vegan ingredients of Japanese cuisine are mentioned below and used at Hibachi restaurants to comfort you.

It is a special vegan-friendly seasoning used at the Hibachi chain of restaurants. Its seasoning is a perfect blend of white and black sesame seeds and dried seaweeds. All the co-ingredients used in the seasoning are vegan, and you need not worry if you find this name in the list of ingredients.

Teriyaki sauce is famous for its use in specific Japanese items. It has four key components: Soy sauce, sake or mirin, sugar, and ginger. It is specifically used to marinate vegetables and tofu in the case of vegan entrees.

Miso is a staple ingredient of Japanese cooking. It also happens to be vegan-friendly! It is made by fermentation of soybeans with rice or soybeans with barley or other grains.

Its subtly sweet flavor makes it a perfect complement to multiple dishes.

These are noodles made of buckwheat. They come in two forms — dried and fresh. Soba can be served in steamy broth as a noodle soup. You can fry these soba noodles to make Yakisoba — a popular form of Japanese noodles.

The flexible nature of the ingredient makes it a vegan-friendly dish for all seasons!

Is Fish Used In Hibachi Orders?

As Japan is a nation with numerous islands in the Pacific, seafood is rooted in its cuisine. The seasonings are mostly inescapable as most of them contain fish extracts.

At the same time, Hibachi cooking provides several complete vegan dishes. It is a wise move to ensure that no fish-based seasoning is used in the dish. You can ask the manager about the unknown sauce used in the dish or google it.

A list of fish-based seasoning is given below that you should avoid and reject the dish if it is included in the ingredient list.

It is a fish-flavored soy sauce that is not vegan and contains fish extracts to add flavor to dishes like soba, somen, and udon.

Natsume is a sauce made from eel broth, mirin, soy sauce, and sugar. It is dense and naturally non-veg.

The Hibachi foods are vast and exotic. It is evident from the Japanese perspective that vegetables play a vital role in their cuisine. So, it is easy for vegans to spot their desired item on the menu.

The Hibachi restaurants also include a separate menu to make it accessible for the vegan audience to enjoy their food instead of hustling into research.

The popularity of veganism and its culture has made a global impact on the different food sectors. Japanese cuisine has always prioritized the greens in their recipes. Thus, vegan food has variance in its dishes. In an era of rising health problems, the people of the United States are shifting to a healthier diet for better living. It is when the vegan options offered at Hibachi restaurants come in handy!

You can expect tossed mushrooms, smoked tofu, crunchy salads, and smooth miso soup at Hibachi restaurants. The variety of taste and texture available in the Hibachi dishes makes it a Japanese paradise for food lovers.