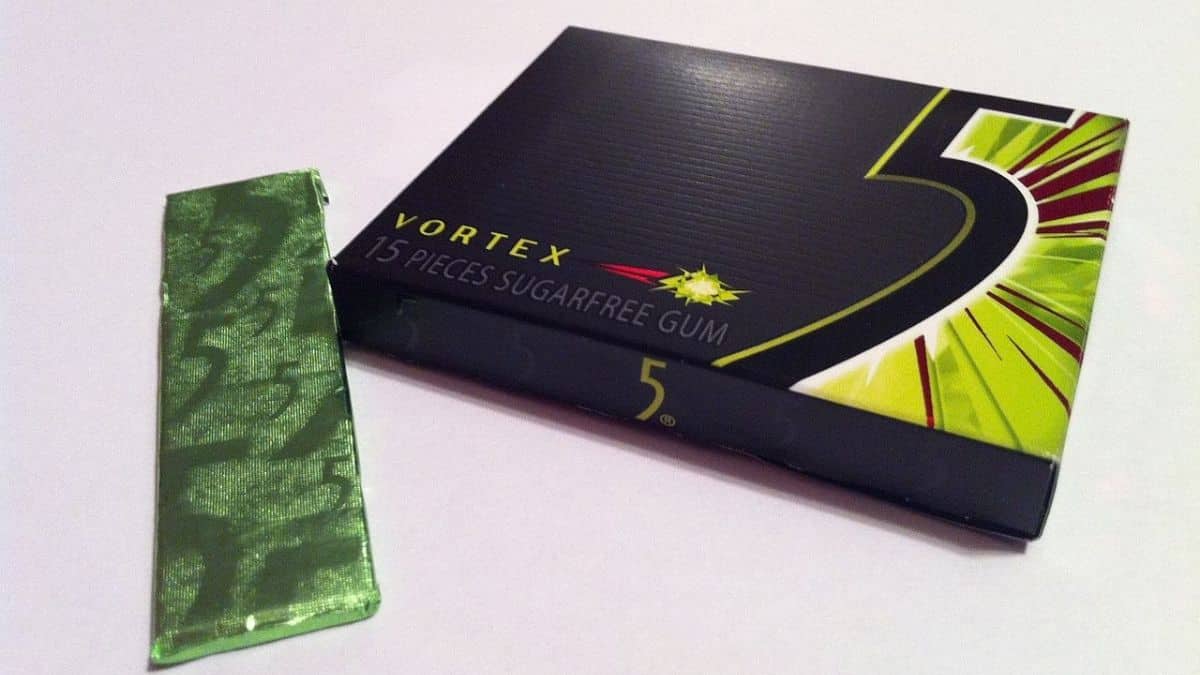 Answer: It depends. 5 Gum is technically vegan but it is alleged that innocent animals and the Earth’s natural resources are being taken advantage of for some of the ingredients found in this gum.

It’s true. The fresh, flavorful, bright 5 Gum you know and love is vegan. This is excellent news for plant-based eaters everywhere because this gum is relatively cheap and easy to find compared to specialized vegan brands.

5 Gum is an extremely accessible vegan snack. Even though it is technically considered vegan, it has a couple of ingredients that raise ethical concerns. These ingredients could bring some people to consider 5 Gum non-vegan.

If you are skeptical of 5 Gum after learning about glycerol and artificial colors, many gum brands tailor to the needs of vegans and ethically-minded individuals. Read further to explore if 5 Gum is truly vegan for you.

Here’s something to chew on: many brands of gum are not vegan. Stride, Orbit, and Extra all contain animal fats and proteins. There are a few ingredients you should be mindful of when choosing your chewing gum as a vegan.

An ingredient to look out for is glycerol. Glycerol is a clear, fragrance-free liquid that can be made from plants or animals. If the label doesn’t specify the origin of the glycerol, it’s safest to assume it is made using animal fat.

Gelatin is another additive that should be on your watch list. It is often made from an animal protein called collagen. Gelatin is used in recipes to give the dish a gummy texture. There are many vegan alternatives to gelatin. Agar-agar is the most common vegan substitute.

Stearic acid is also found in animal fats and is most commonly used in recipes to bind the ingredients together. You don’t want to see this listed on the ingredients list.

5 Gum does not use stearic acid or gelatin, but glycerol is included in the ingredients list. We don’t know the origin of the glycerol they use.

Many skeptics believe that if 5 Gum uses glycerol derived from vegetables, they would clearly state so on their packaging. Using vegan substitutes is something to be proud of, after all.

But wait – are there other concerns you should consider? Although 5 Gum is technically vegan, it may not be cruelty-free. It is alleged that innocent animals and the Earth’s natural resources are being taken advantage of for some of the ingredients found in 5 Gum.

Except for the Winter Ascent flavor, every flavor of 5 Gum contains artificial colors. Artificial colors are technically vegan because they aren’t made with animal body parts, but they are often tested on animals.

A chemical engineer and freelance nutrition writer broke down each of the dyes used in 5 Gum. He found that each color is tested on animals. Usually, the animals being subject to testing are mice, rats, or dogs. The bright blue of Peppermint Cobalt 5 Gum is no longer so captivating.

5 Gum’s artificially colored red flags don’t end there. The vegetable glycerol used could be derived from palm trees. They contribute to our rainforests’ mass deforestation.

Where 5 Gum sources its vegetable glycerol is not clear. This is where your judgment comes in. You get to decide for yourself what ethical standards a product needs to meet to be considered vegan.

Some brands of gum are vegan but don’t advertise the fact. It seems as though they are vegan by happy accident. Mentos Gum is both nostalgic and vegan. The mouth-watering, fruity Juicy Fruit is also vegan. Even Big League Chew is considered vegan.

There are brands of gum that cater specifically to the needs of vegans. These gum brands can be more costly than conventional gum brands but offer more to the chewer.

Pur Gum is a well-known fan favorite. It is certified vegan and non-GMO. This gum is also sugar and aspartame free, making it available to mom-to-be vegans and vegans living with diabetes. Gum lovers have very little negative to say about Pur.

Another gum company that caters to the unique chewing needs of vegans is B-Fresh Gum. This gum is the right choice for diabetics as there is no sugar. This company even adds B12 for a burst of energy.

Neuro Nootropic Gum takes vegan gum to another level. You will feel a boost of balanced chi and positive moods while chewing this gum as it is uniquely created with natural caffeine, Vitamin B6, Vitamin B12, and L-Theanine.

A sugar-free and environmentally friendly option is Tree Hugger gum. It is made using sustainable ingredients. Most impressive is the minimalist list of ingredients. This gum contains only five ingredients.

5 Gum can be considered technically vegan. However, vegetable glycerol and artificial flavors raise ethical concerns. Animals and the environment may be abused in the process of making 5 Gum.

For this reason, some people may not consider 5 Gum genuinely vegan. Others may decide that only the Winter Ascent flavor is vegan. Others may choose to avoid the confusion altogether and opt for an official vegan brand.

The ultimate answer to “Is 5 Gum Vegan,” is entirely in your hands, guided by your values as a vegan.