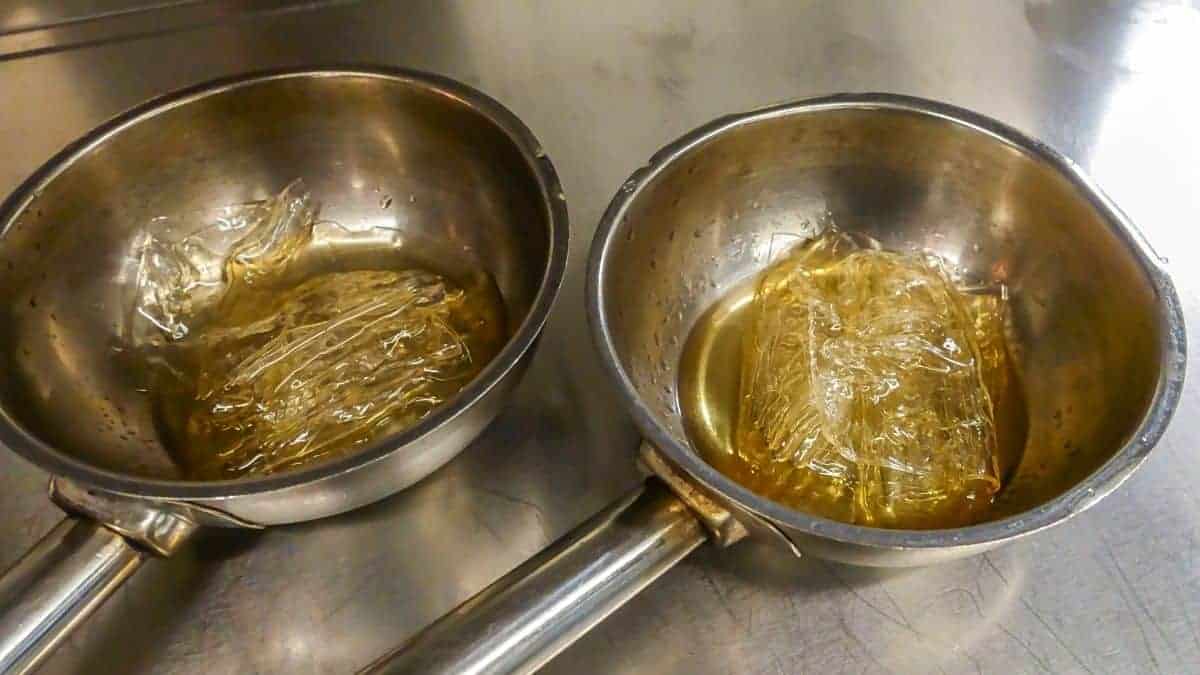 A lot of times, you have to avoid scrumptious-looking dessert items because they contain gelatin. However, kosher food is primarily prepared as per the Jewish dietary laws, and some of these items are vegan-friendly. Even vegan desserts fall into the kosher category.

In this article, we’ll take you through everything concerning Kosher gelatin. Since everyone deserves to enjoy finger-licking desserts, why should vegans be left out? To help you out, we have also included some tasty vegan alternatives for you.

What Is Kosher Gelatin, And Is It Vegan?

Gelatin is an essential component that you’ll find in candies, yogurt, and many desserts. It helps elevate the consistency of food items and is also used in medicinal capsules and tablets.

However, it’s utterly non-vegan as it’s sourced from the skins and bones of animals like cows and pigs.

All kosher food items, including kosher gelatin, are prepared under the observation of a rabbi. The main ingredients of kosher gelatin are as follows.

Typically, standard gelatin contains boiled skin, bones, ligaments, and tendons of pigs, cows, and fish. Additionally, sometimes it also contains dairy directly, or it’s prepared in a dairy facility. That indeed tells you that kosher gelatin is not even vegetarian, let alone vegan.

Kosher gelatin tastes just like regular gelatin, that is, tasteless. Moreover, it’s only a protein made from animal bones, other than a pig, so it’s also odorless. It thickens any substance that you put it in and increases its consistency to make it solid.

Hence, you’ll find that it tastes like the resultant food item. It would help if you didn’t think of it as Jell-O, as it’s not pure gelatin but its flavored product.

Apart from being non-vegan, Kosher gelatin has minimal or absent amounts of vitamins D, E C, B6, and B12. Here are its nutritional components:

Is Gelatin Good For Health?

Since gelatin only contains protein, you cannot derive energy from it, let alone nutritional value. Its benefits directly depend upon the main dish that you create using it. If it’s used in soups and medicines, you can derive a host of benefits.

On the contrary, if you use it to prepare Jell-O or cakes, they’ll be termed as unhealthy. On the brighter side, gelatin contains amino acids like valine and finds its use in capsules and food supplements.

Since it constitutes glutamic acid, it improves your digestive system by enhancing the mucosal lining. Also, it may help with joint pain as it decreases inflammation in most cases.

With its low calorific content, it aids weight loss if you consume it in moderate quantities. In case you have it in chocolates, marshmallows, or candies, it will have the opposite effect on your body.

Due to a component called lysine, it strengthens your bones and helps you absorb calcium much faster. However, you can always opt for kinder and healthier alternatives to solve these problems.

As mentioned before, if you add it to unhealthy food products or items, it will prove quite harmful. In its essence, it contains animal fat and collagen and can carry air-borne diseases.

The quality of gelatin also varies, and you cannot rely on every gelatin. In the case of kosher gelatin, the health of the animal impacts its quality.

As a thickener and solidifier, gelatin has a plethora of uses. You can get packets of gelatin from any grocery store, and they will contain ¼ ounce of gelatin powder, on average. People also use gelatin sheets for the same purpose.

You must always confirm before directly consuming any products containing gelatin if you’re a vegan. If it comes with a K symbol, then it means it’s kosher. However, is kosher gelatin vegan? Evidently, it’s not.

Apart from using it to thicken liquids, you can also use it to make pudding, chocolates, cakes, and even ice-creams. As a vegan, you must also steer clear of gelatin ice-creams and gelatin fruit desserts. It’s best to confirm with your server before ordering such items.

Much to every vegan’s delight, vegan gelatin is available, but it’s not kosher gelatin. These vegan gelatin options are becoming increasingly popular, and now you can find them anywhere.

This gelatin-like substance is made from pressed algae and will help you whip up delicious desserts. It has found use in jellies and Asian desserts worldwide due to its creamy texture and taste.

This seaweed will naturally thicken your food to help you bring it to a great consistency. You can get it in powder, flakes, and even sheets. As a bonus, you can lose weight if you combine it with healthy food items.

Just like the name suggests, this substance serves as a gelatin alternative. You can be used in any dish in place of gelatin. It’s manufactured by Natural Desserts and constitutes vegetable gum instead of animal-derived collagen.

It’s relatively easy to incorporate into your food and has a very soft texture. Since it doesn’t come with an inherent flavor, it will only enhance your food taste and not alter it.

Like agar-agar, even carrageen is made from seaweed, namely Irish moss, but it’s dried. You can use it in dairy products like yogurt and ice-creams for thickening purposes. It’s flavorless and can be prepared quickly.

Additionally, it’s versatile and great for soups, mousses, puddings, and even soft jellies. What sets it apart is that it will help you develop smoother and gooier food items that will melt in your mouth. It’s best if you use it in its whole form and instead of powder.

This one is an unflavoured, super-efficient alternative to gelatin that you can get in six flavors. To top it off, it’s also gluten-free! It’s completely vegan as it’s made from vegetable gum and evaporated cane juice.

It sets fast, and you don’t even have to bake half the desserts you make using this. Also, with no artificial flavoring, it has no side-effects.

Pectin is a starch form that you can use in jellies, jams, and other items. It also acts as a preservative and is entirely vegan. It’s sourced from the fruit and vegetable cell walls.

If you combine Pectin with sugar, it will help you set beautiful desserts. You can easily use it in semi-solid recipes or food items like jams.

While this is not a full-fledged alternative to gelatin, it does solve one purpose beautifully. Gelatin makes a great combination with alcohol, and as a vegan, you want to join the party.

Jel shots are premade Jell-O-like shots that you can add to your drinks. They are available in unique flavors like banana, root beer, raspberry, and cinnamon, to name a few. The highlight is, they are gluten-free, recyclable, and of course, vegan.

If you follow a kosher diet, being a vegan, you have plenty of vegan-friendly options. Since all vegan food is considered kosher, you have the whole vegan menu at your disposal.

Hence, a vegan lifestyle is fully facilitated by kosher dietary laws. Just keep the preparation method and equipment used under the strict provision, and you’re good to go.

Life as a vegan doesn’t have to be challenging, despite conventional belief. With millions of people like you adopting this sustainable lifestyle, you have plenty of options. Even an animal-derived substance like gelatin has vegan-friendly alternatives.

Is kosher gelatin vegan? Well, no, but you have other items in the Kosher diet that will suit your vegan lifestyle. Now that you are aware of your vegan alternatives, it’s time to bake some incredible desserts. Happy vegan journey ahead!