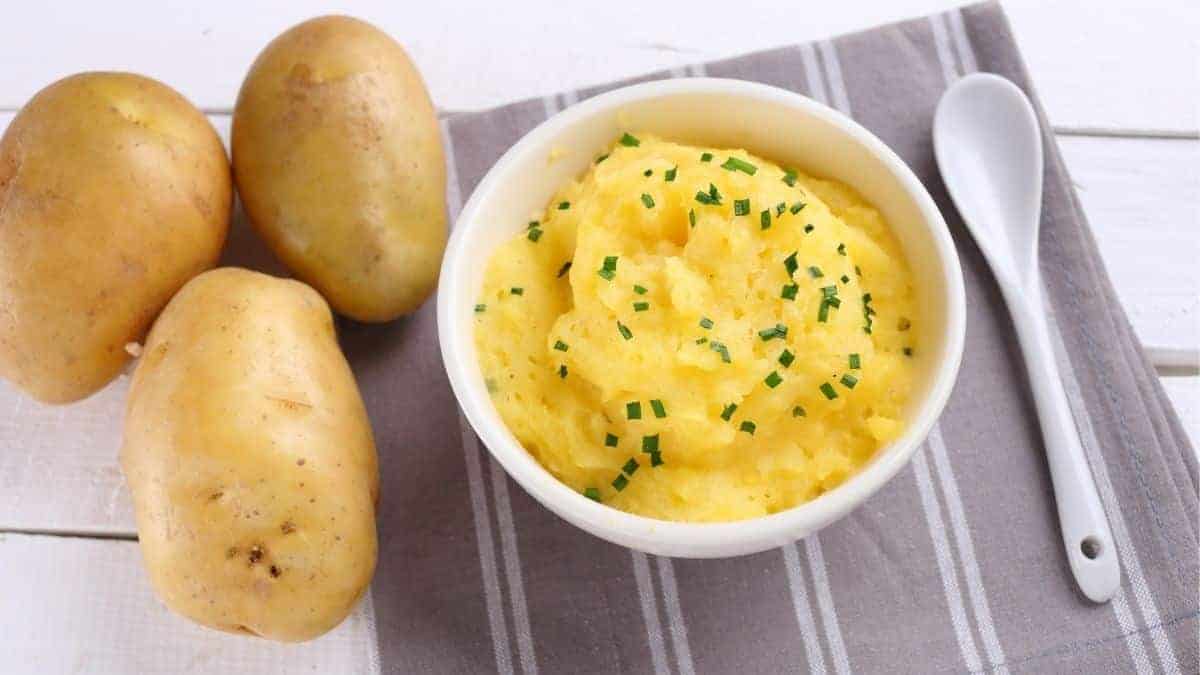 Vegans don’t consume animals or their byproducts. This includes meat, eggs, milk, fish, honey, and other dairy products. Even if it’s organic or directly from a farm, milk is still a no-go.

This article will explore why these ingredients are unacceptable by vegan norms.

KFC states that there is milk in their mashed potatoes. Chicken fat is also listed as an ingredient. The gravy mixture is a combination of gravy powder, water, and chicken crackling.

What Exactly Are Mashed Potatoes?

You may have heard that many people consider mashed potatoes to be a meal in itself. It is one of KFC’s most popular sides, and people love the buttery smooth potatoes topped with salty potato gravy.

The ingredients listed on KFC’s website for the gravy include wheat flour, food starch, chicken fat, palm and canola oil, salt, spices, and butter. Chicken fat and butter are a clear no-go for vegans.

According to KFC’s ingredient list, KFC uses instant mashed potatoes. Half a cup of prepped potatoes contains about 370 milligrams of sodium.

They also contain a mixture of additives such as maltodextrin, mono- and diglycerides, sodium bisulfite, and BHT. Butylated hydroxytoluene is approved by the FDA but is known to cause cancer among animals.

Another ingredient used is wheat flour which is not gluten-free. There is also an ingredient called chicken crackling. This is made from little fat and bread that fall off the fried chicken in the deep frier.

These bits settle at the bottom and are filtered out when the oil is cleaned. KFC workers collect these bits and dump them in new batches of gravy. You might think this sounds gross, but it’s how the moist gravy is made.

If the crackling isn’t available, then just the gravy mix and water are used. It still doesn’t qualify as vegan because it includes butter. Vegetarians could consume the non-crackling gravy. However, it is best to steer clear of the gravy.

Even if you want to order plain mashed potatoes, you might be disappointed to hear that it contains milk. KFC isn’t exactly a paradise for vegans. Clearly, the name speaks for itself, but it does include a few vegan options.

The main reasons are animal rights, animal welfare, and poor treatment of cows, including steroid use and forced impregnation. Healthy vegans eat a particular set of foods. Substitutes to use are margarine and non-dairy creamer.

One serving of mashed potatoes with gravy contains about 120 calories.

Note: It is important to remember to order corn on the cob and sweet kernel corn without butter.

Are you looking to substitute the carbs in potatoes for healthier options? Here are some solutions.

By switching from potatoes to cauliflower, you save about 53 calories and 13 g of carbs per half-cup. Cauliflower contains higher amounts of vitamin C, calcium, B2, and vitamin K.

Potatoes also have a very high glycemic index when compared to cauliflower. With mashed cauliflower, you get similar flavors and close consistency. A little bit of garlic added to baked or boiled mashed cauliflower makes for a heavenly side dish.

Parsnips are an underdog in the general American diet. They are loaded with vitamins and packed with subtle flavors. They are similar to carrots but cream-colored and have a thicker consistency.

A half-cup serving of parsnips contains 3 g of fiber and 55 calories. It also provides 11% of the recommended daily intake of vitamin C. Parsnips are on the sweeter side with a hint of spice. You can boil parsnips and blend well while adding hints of garlic.

Turnips have a texture similar to potatoes. A cup of turnips contains about 4.2g of carbs and 1.2g of fiber. They are a good source of vitamin C, vitamin K and are rich in antioxidants.

Butternut squash may be a sort of winter squash that grows on a vine. It tastes similar to a pumpkin with a sweet, nutty taste. The fleshy pulp makes for a great side dish.

Butternut squash contains 15g net carbs per cup and is accepted by keto dieters. It tastes delicious when roasted, puréed, or baked with a little bit of garlic.

Carrots are one of the best vitamin A sources and contain a good number of vitamins and minerals. They are also high in sodium and keto-friendly if you stick to a regular portion.

Rutabagas are lower in calories and carbs when compared to potatoes. A cup of cooked rutabaga contains 51 calories and 12g carbs. It is a hybrid between a cabbage and a turnip.

It tastes milder than turnip with a sweet-savory taste, but it can also be quite bitter when raw. They are rich in calcium, potassium, vitamin C and E while being keto-friendly.

Cooked and mashed celery root falls on the sweeter side and tastes a bit like parsnip. One cup contains 5.9g of carbs and 42 calories. It makes for a great low-carb mashed meal. It is filled with vitamin K, phosphorous, and heart-protecting potassium.

It is crisp, firm, and has a parsnip-like texture that sweetens while cooking.

Acorn squash is milder in taste with a nutty flavor and more fibrous in texture than butternut squash.

It is rich in nutrients such as potassium, fiber, vitamin C, and magnesium. It contains many beneficial plant compounds and rich in antioxidants. Acorn squash can help protect from type 2 diabetes and heart disease.

Brussels sprouts have around 4.5 g net carbs per cup, making them a great low-carb vegetable to add to your diet. They are rich in fiber, vitamins, minerals, and antioxidants.

They also provide health benefits like reducing cancer risk, improving blood sugar control, and decreasing inflammation. When cooked properly, they have a sweet, nutty, and smoky flavor. You can make uniquely tasting mash with Brussels sprouts.

Sweet potatoes are very high in vitamin A and C compared to potatoes. They contain about 20g net carbs per medium potato.

This root vegetable has a slightly sweeter taste which reflects in your mash. This sweet-tasting root vegetable is also high in potassium, minerals, and fiber.

Vegans take into consideration a certain set of food that adheres to vegan norms. Consumption of animals and their byproducts is a no-go. You might be just transitioning into veganism and looking forward to switching to healthy alternatives.

Fortunately for you, there is also a plethora of readymade gravy packets available if you want to decrease the cooking time. Make sure you check nutrition facts and ingredients lists on all the dishes you eat in the future.