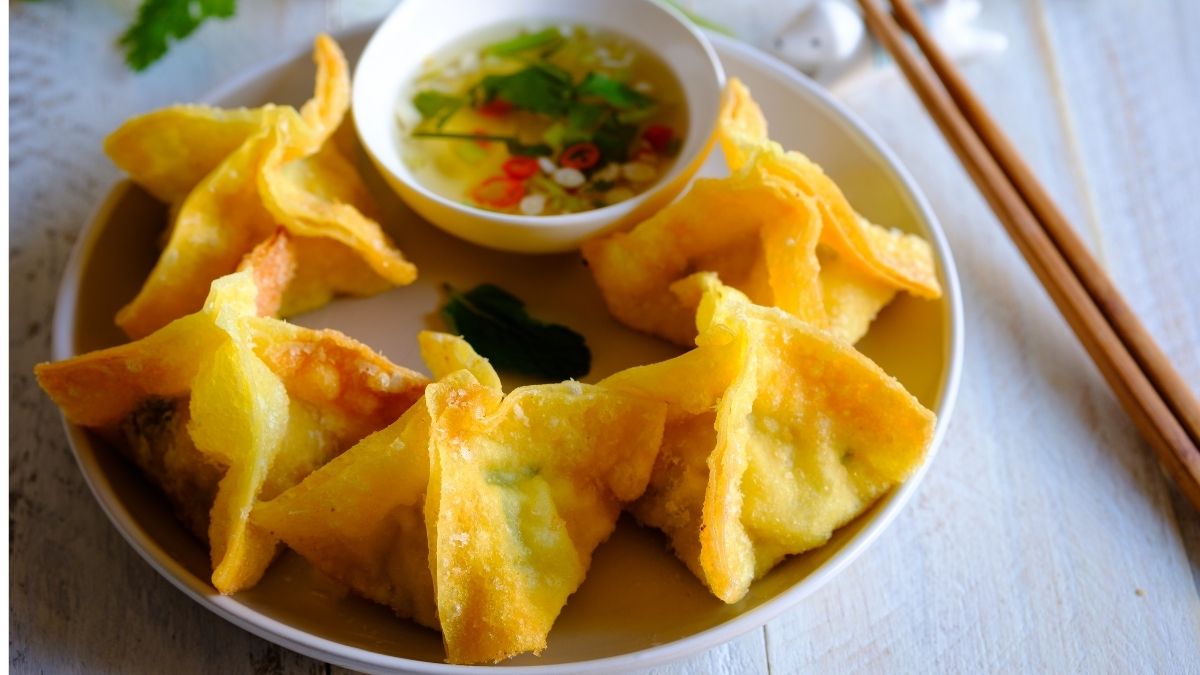 A wonton is a kind of Chinese dumpling that may be found across most regional forms of Chinese cuisine, particularly wonton soup. The wonton can also be served as an appetizer like a fried dumpling or split up and sprinkled on salads. Many vegans grew up eating wontons and would like to know whether they can make them vegan or if they must give them up after committing to a vegan diet.

Unless otherwise specified on a brand or menu, wonton is usually never vegan. Classic wonton recipes use a variety of animal items like chicken, pork, chicken or pork stock, shrimp, and maybe some additional non-vegan components.

What we’ll do here is go through the non-vegan components you’ll find in wonton, as well as the vegan alternatives available in the market as well as their nutritional content.

Wontons are a traditional Chinese-filled dumpling that may be found all throughout the country, appearing in a variety of regional dishes. They’re formed by spreading out a sheet of dough, or wrapper, directly in the palm of your hand, stuffing and forming them into any shape with your fingers, and pinching the wrapper close. The wontons are then cooked, steamed, or fried before being put into soups.

What Are Wontons Made From?

The dough for the wrapper is often composed of water, wheat, eggs, and salt, but the filling may be nearly anything ground and seasoned shrimp, vegetables, or meat being the most common.

What’s The Difference Between Wontons And Dumplings?

The difference between a dumpling and a wonton is that a dumpling is formed of dough that contains some components or has a filling and can be filled or the contents can be combined with the batter and formed into balls, but a wonton is a classic Chinese dumpling that usually contains filling with various meats, vegetables, or kinds of seafood.

The USDA provides the following nutrition information for one fried wonton approximately 19 g packed with chicken, pork or vegetables, and shellfish.

Take note that when prepared as an appetizer, you can eat from 2 to 3 wontons or more. Also, fried wontons as appetizers are frequently served with a dipping sauce that may contain fat, calories, fat, salt, or sugar.

Wonton is not vegan, but is it healthy?

Wontons, whether steamed or fried, are unlikely to provide major health advantages. Energy is provided by the meal in the form of fat and carbohydrates. If you add poultry, meat, or seafood, you’ll get a tiny boost in protein, which helps build and maintain muscle growth.

Some research proved that eating wonton may help preserve cognitive function, and may help support stronger bones depending on the ingredients used in preparing.

Plus, wontons can benefit your overall health by supplying at least 8% of the total vitamin B required every day, in addition to increasing your energy levels, muscle development, and metabolism.

Wontons Are Not Considered Vegan

Here are the reasons why vegans should avoid consuming wontons.

The wonton or wonton wrappers are the first items to consider. Wontons are a kind of pasta that may include eggs.

While many traditional kinds of pasta do not include egg as a component, some just use the yolk for color, while wontons make extensive use of egg.

The major difference between wontons and other types of pasta is the shape by which they are distinguished. Pasta is known by a variety of names according to the type of disc used, including spaghetti, linguine, vermicelli, ravioli, macaroni, and wonton wrappers.

Given the position of other varieties of pasta in the vegan community, it should come as no surprise that the wonton itself might be troublesome for vegans.

So the first possible issue is the egg. It is not to say that eggless wontons will never be available on the market. Every day, new vegan specialized goods emerge. However, for the time being, eggs appear to be the standard.

Wonton Soup Made With Meat Stock

Wontons can be found in a variety of forms in American-Chinese cuisine.

First, as an appetizer. Fried wontons are frequently offered as appetizers at Chinese restaurants, particularly buffets. Second, like wonton soup. This is just a little more than wonton poured in a transparent liquid soup.

As we’ll see, the soup form may provide a variety of vegan issues, but by far the most important ingredient to consider is the broth.

To be honest, there is a wide range of vegetarian broth on the market. While these would be ideal for preparing your own personal wonton soup as well as an egg-free wonton alternative, the vegetarian broth is unlikely to become a norm in most soups. Unless, of course, there is a vegan section on a restaurant’s menu.

It’s possible that no broth will be used and that water will be the only medium, but we can’t depend on it.

This is a common issue with wonton soup as well as fried wontons.

The majority of fried wontons are filled with meat, primarily pork. To make things a bit worse, they’re frequently served with duck sauce, though plum or hot and sour sauces, as well as spicy mustard, can be added.

And then there’s cream cheese. Cream cheese, on the other hand, is off the table unless you’re lacto-vegetarian. In addition, many cream cheese wontons are packed with crab meat, giving rise to the term “rangoon.” As a result, even lacto-vegetarian may find this version unacceptable.

As a result, eggs in the dough and cheese or meat fillings are problematic for vegans. Wontons are usually created by flattening a square wrapper composed of flour, salt, water, and egg, then filling it with a little quantity of ground meat filling and sealing it closed.

Unfortunately, there are no commercially available ready-made wonton soups.

In terms of wrappers, the wonton wrappers that come with the wontons include eggs. Spring roll wrappers, which do not contain eggs, can be used. These spring rolls are crunchy when fried, but have a somewhat different texture than these wrappers, which have a smoother surface and a lighter feel. Because wonton wrappers include eggs, they have a texture and color that is similar to egg rolls.

Here are the most popular commercial alternative ingredients  that may be used to enhance your vegan wonton:

Nasoya is an amazing wonton wrapper.

It is made using enhanced wheat flour fortified with decreased iron and vitamin B, water, salt, and gluten, sodium benzoate and sodium propionate, citric acid, and i-cysteine.

It is entirely up to you whether or not you choose to consume i-cysteine-containing foods. It is traditionally generated from feathers and dog hair, although it is frequently synthesized, especially when food makers want to comply with Jewish kosher and Muslim halal requirements.

So, using Nasoya, vegetable broth, and a few plant-based fillings, you’ll be well on your way to making your own 100% vegan wonton soup.

If you despise cooking but enjoy experimenting, a prepared mix is a great option for you. When it comes to wonton soups, no other product beats vegan wonton soup mix.

This combination is available from Dynasty Foods and contains entirely vegan ingredients such as sesame oil, salt, glucose, caramel color, hydrolyzed protein, monosodium glutamate, as well as others.

Yes, the vegan wonton soup mixture doesn’t really have wontons. If you can get vegan-friendly wonton wrappers in the store, it’s a really good substitute.

Wontons are not the best choice for your vegan plate. Vegan wontons are extremely tough to get by. This is due to the fact that wonton soup contains a variety of animal and dairy products, including eggs, cheese, chicken or pork broth, and other non-vegan ingredients.

But if you follow a strict plant-based diet, we have highlighted some of the most popular vegan-friendly and tasty alternatives to wonton above so you won’t have to give up savoring wontons after going vegan.