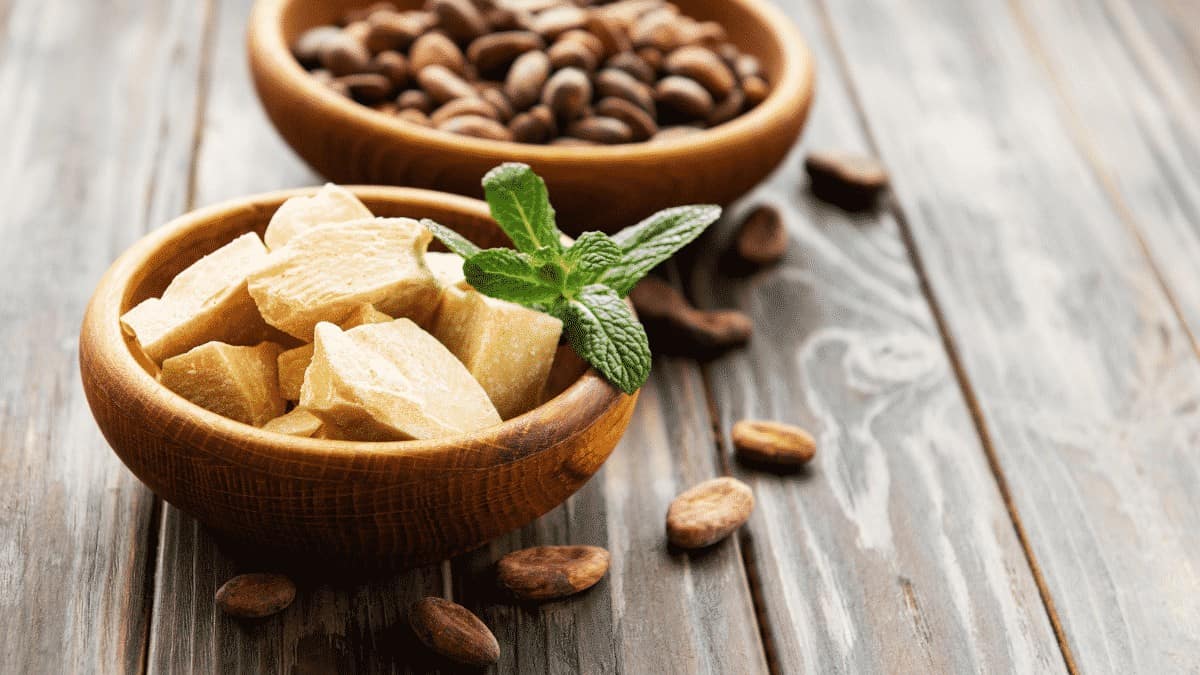 What is Cocoa butter, anyway?

Cocoa butter is a natural, edible fat extract that comes from cocoa beans. It has a pale yellow color, and it’s entirely free of milk, butter, or any other dairy products. So, it’s an entirely vegan food that not only tastes great but has a bunch of health benefits too. It also has benefits for skincare. That explains why you see it as an ingredient in so many skin products and ointments. More importantly, it’s also the primary ingredient of most of your favorite chocolates.

To extract it, the harvested cocoa beans get fermented. Then, after they dry, people roast the beans. The oil for the butter then gets extracted. The residue also has a lot of use in the form of cocoa powder.

Are all Cocoa butter products vegan?

Well, no. Cocoa butter comes with multiple cosmetic and culinary uses. This means it’s very often a part of food items that have other dairy or animal products. In these cases, it’s important to know whether the food you’re eating is vegan, even though it may contain cocoa butter.

Which cocoa butter foods to avoid?

The cocoa butter, on its own, doesn’t have any animal or dairy ingredients. So, that’s nothing to worry about there. For example, dark chocolates usually come with cocoa butter as the main ingredient. They may have sugars and cocoa liquor too. But these are all relatively safe to consume for vegans.

But you should choose carefully when it comes to white chocolates or milk bars. These products usually have powdered or condensed milk in them. So, even if they have cocoa butter, these other dairy ingredients make them unfit for vegan consumption. Also, there are many cocoa butter foods that use ingredients like eggs, gelatin, honey, etc. You’ll usually find this combination of ingredients in chocolate cakes and some baked items.

To make sure that your cocoa butter product is vegan and healthy, you should regularly check out the other ingredients. Some examples of stuff to avoid are lactose, gelatin, dairy, eggs, honey, whey, carmine, cochineal, or Omega 3 fatty acids. The safest bet is to go for another product that you’re sure is vegan, if you aren’t sure about it.

Yes. Cocoa butter is naturally and entirely gluten free. Also, vegans can eat gluten too. The problem with gluten is not directly related to the vegan lifestyle. It’s only dangerous if you have health complications related to gluten.

Glutens are, essentially, a type of protein that you’ll find in some cereals and grains. Barley, rye, and wheat are some common examples of gluten foods. People sometimes know them as Prolamins too. And glutens can come in a variety of types too, depending on the source food. For example, glutenins usually come from wheat, Hordelins comes from barley. You’ll find Secalins mostly in rye. But the point is that they’re each a type of gluten. But they’re all natural and vegan as far as consumption goes.

The only problem with gluten consumption is if you have allergies or reactions to them. For instance, if you have Celiac disease, gluten can be lethal to your health. In this case, it’s best to refrain from taking them. Several foods have both cocoa butter and gluten as ingredients. So, if you’re a vegan with gluten allergies, you’ll want to steer clear from foods that have gluten in them.

Gluten and dairy aside, cocoa butter is an excellent addition to any vegan meal plan. And it’s not just the exotic taste of a dark chocolate bar. Cocoa butter shows potential benefits to your skin and body too. It has antioxidants as well as anti-inflammatory effects when consumed. It also has potential soothing and repairing properties for stretches and blemishes on the skin. Since cocoa butter is a completely natural oil, it doesn’t bring the harsher side effects of other chemicals and ointments. However, check your cocoa butter cosmetics to make sure it doesn’t have other ingredients that react to your skin.

In its natural form, cocoa butter is completely safe for vegans and an incredibly useful ingredient in both diets and ointments.