What Are The Vegan Options At Einstein Bagels? (Updated Guide) 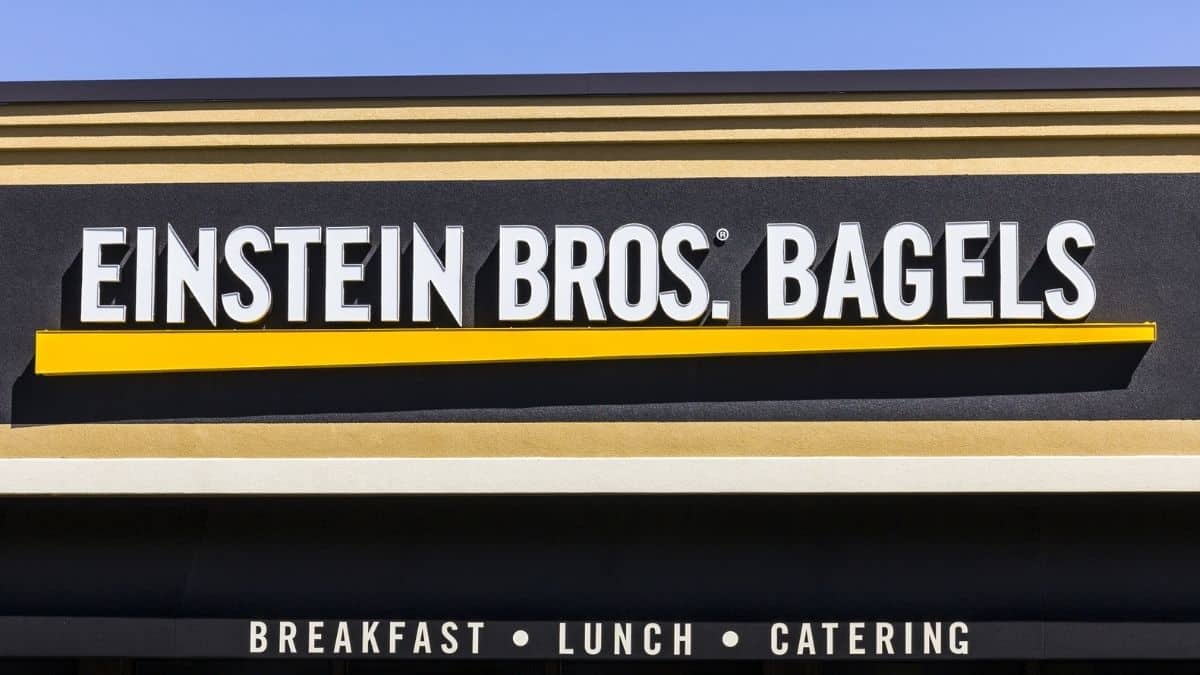 Einstein Bros. Bagels is a bagel and coffee shop chain, having over 700 stores in the USA. It has been serving baked goods and bagels since 1995. Their menu has more than a hundred items, and luckily, a lot of them are vegan. They are also the largest bagel chain in the United States.

Einstein Bros. has 21 bagels that a vegan has to try. Apart from that, there are a few other vegan things you can order directly from their website. The bagels include Sesame, Blueberry, French toast, Power Protein, etc.

Einstein Bros. categorizes their bagels into three categories – classic, signature, and gourmet. Moreover, they have other vegan items as well for you to try. Check out the below lists to know more about these vegan options at Einstein Bros. Bagels.

Classic bagels are popular at Einstein Bagels due to their simplicity and authentic taste. Here are a few classic bagels that people love from this bagel shop:

As its name suggests, this is a plain bagel with a balanced amount of ingredients that makes it better than many. Even though it’s a plain bagel, you can get 9 grams of protein with only one piece of this classic.

With every bite of this classic Everything bagel, you will get an all-in-one taste due to Einstein Bros’ Everything Spice mix. It contains poppy seeds, sesame seeds, onion, salt, and garlic. These ingredients give you a whole new bagel-eating experience.

The cranberry bagel allows you to get the sweet taste of cranberries any time of the year. It is an excellent breakfast bagel that no vegan should miss at Einstein Bros. The unique flavor and perfect toasting add to the softness and sweetness of the bagel.

Einstein Bros. describes their Cinnamon Raising bagel as a match made in heaven. The sweet and juicy raisins mixed with the pleasant aroma of cinnamon is undoubtedly going to melt you down. Perfect toasting is the only thing left to make this bagel the perfect one for your morning meal.

This bagel is a blend of onions, poppy seeds, salt, water, and a few other ingredients that pack up the perfect punch. You will relish every bite of the Onion Classic bagel if you add the cream cheese on top. However, the cheese won’t be an option for vegans unless they have the vegan cream cheese available at the store.

An Ancient Grain bagel is an ideal choice to start your day with a nutritious food item. Its main ingredients are amaranth, quinoa, chia seeds, sunflower seeds, flax, pumpkin seeds, and other healthy nutrients.

The Ancient Grain retains its soft texture even after the toast. Moreover, the countless ancient grains make it crunchier and give it an earthy flavor.

The savory garlic flavor in this bagel will seem excessive at first, but the sesame seeds balance it out. Its soft texture makes it easy to eat even if you toast it. The best thing about this bagel is that it only contains 2 grams of fat. So, vegans won’t have to worry about their weight.

Poppy seeds embellish the classic bagel by adding a crunch to its deliciousness. It is the ideal breakfast meal to start your day.

A simple bagel, filled with sesame seeds, and still one of the best from Einstein Bagels’ menu. It is the go-to bagel for many individuals – vegan or non-vegan. The ample sesame seeds in every bite, along with the toasting that makes it crunchier and aromatic.

Pumpernickel, a German-inspired bagel, has a dark, gorgeous color and delicious flavor. Rye flour, caraway seeds are molasses are the three magic beans that make the perfect pumpernickel bagel.

Einstein Bros have a variety of signature bagels that are vegan-friendly. You can find the list below.

The Blueberry bagel contains real berries and not an artificial flavor. Warm it up and take a bit to enjoy its sweet, bright, and natural taste. Blueberry is a customer-favorite bagel because of its sweetness and authenticity.

The French Toast bagel tastes the same as its name suggests. The crunchy cinnamon, brown sugar, and vanilla make it one of the best bagels. Its incredible aroma and the home-like taste is the reason why a lot of their customers love it.

Pretzel bagel has the appropriate flavor and amount of salt that hit the right spot. It tastes the same as a Pretzel, making it a savory meal for your breakfast. This bagel is one of those items that have high demand and run out pretty quickly.

You can hate chocolates but not the Chocolate Chip bagel by Einstein Bros. To get the right flavor, toast this bagel and let the chocolate chips melt into perfection. It is not only popular among kids, but adults also love warm and melted chocolate.

Einstein Bros has two gourmet bagels that are great options for vegans. These are:

Apple Cinnamon bagel is like an apple pie, but smaller and easy to carry around. It even has a mini apple pie as a topping. The other ingredients include fire-roasted Fuji apples, cinnamon, nutmeg, brown sugar, and Einstein Bagels’ special cinnamon crunch topping.

With 12 grams of protein, this bagel is the most nutritious one on their menu. It comprises sunflower seeds, amaranth, walnuts, quinoa, chia seeds, flax, buckwheat, and pumpkin seeds.

On top of all these ingredients is the sweetness from cranberries, honey, and raisins.

Einstein Bros. Bagels have thin-sized bagels that contain fewer calories than the standard ones. These bagels are great for people who are on a diet. These are:

What Vegan Items Can You Put On Your Bagel?

Following are the vegan items at Einstein Bros. that you can put on your bagel:

The vegan cream cheese goes well with almost every kind of bagel. However, you may not find it in all the stores as Einstein Bros. serves this cream in limited locations. You can try their daiya dairy-free cream cheese, a gluten-free and soy-free cream that can complement your bagels.

Einstein Bros. Bagels also have vegan bread that works great with your bagels. You can find them below:

Other Things To Put On Bread Or Bagel

Here are a few more things that you can put on your bread or bagel to enhance its taste:

They also have sauteed mushrooms and granola that contain dairy ingredients. So, make sure you avoid them while ordering at Einstein Bros. Bagels.

Einstein has a wide variety of sides on their menu. Fortunately, some of these are vegan-friendly. They are as follows:

Einstein Bros. also has a salad on the side. However, vegan salads are not available in most of their shops. There is vinaigrette salad at rare locations for vegans that you can try. The other salads are not vegan friendly, so do not order any of them.

Einstein Bros. Bagels indeed has desserts on their menu. As it’s a vegan-friendly coffee shop, they do have some vegan desserts. These are:

The company started testing daiya vegan cream cheese in all of their 700 locations. PETA’s Executive Vice President, Tracy Reiman, responded to this action by stating why dairy products are necessary for such restaurants and chains.

PETA may have filed the petition in 2019, but they were urging the coffee shop owners to add vegan cream cheese to their menu. Not only Einstein Bros., but they urged other restaurant chains as well.

This action made a lot of vegans go to their restaurants and try their vegan dishes. As vegan food is getting a lot of attention these days, restaurant chains can grab the opportunity and add vegan food to their menu.

With another vegan restaurant on your list, you have even more options to try and dine comfortably at these places. Einstein Bros. Bagels alone has great bagels that vegans can get their hands on.

Not only bagels, but desserts, sides, and extras are also available for vegans. So, next time you want to eat out, Einstein Bros. is an ideal choice. Make sure you order the vegan items only and not get confused with other dishes available.