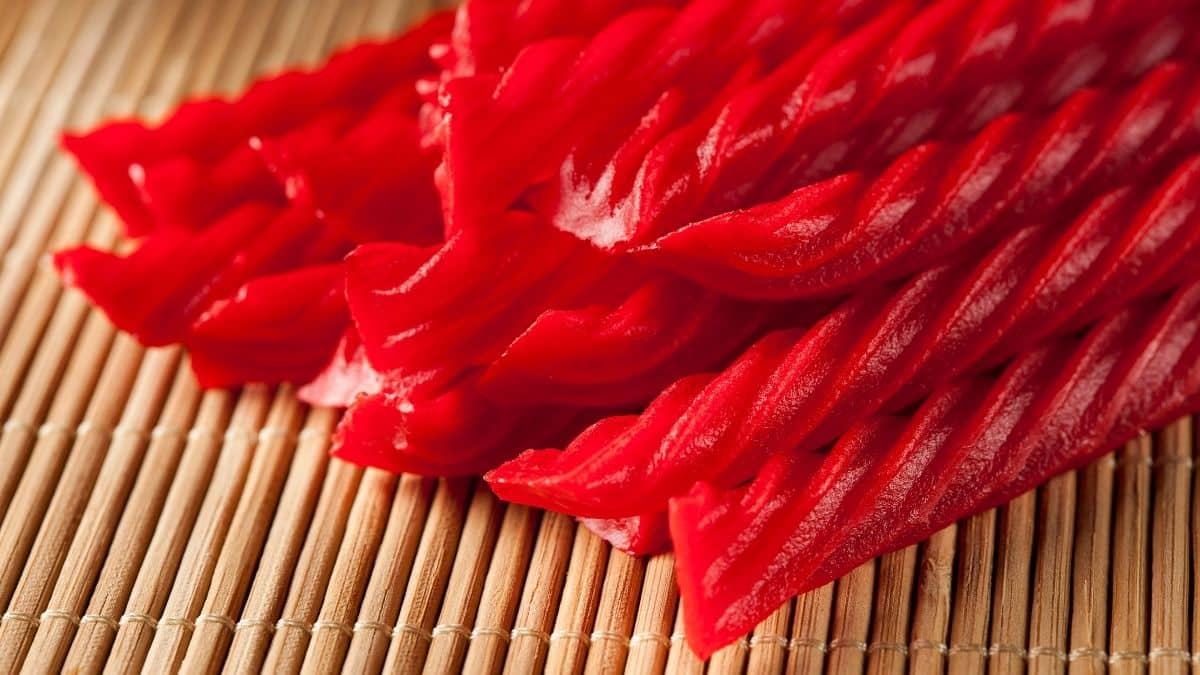 Answer: Yes. If you’re a fan of Red Vines, you’ll be glad to hear that they are indeed vegan.

This popular candy has been around since the 1950s. And since they have been around for such a long time, most vegans today probably grew up eating them. Some adults probably still eat them today.

If you were wondering if this fantastic candy is vegan – yes, it is. Both the red and black variants of the candy are vegan. They have simple ingredients, and the best thing is that they don’t have any animal products in them. This article will give you more insight into this iconic candy and show you why it is vegan.

What Are Red Vines?

Red Vines is an American brand popular for its red licorice candy. This candy is also known as red licorice even though there is no licorice in it.

The Main Ingredients Of Red Vines

They have simple ingredients that are vegan friendly and taste lovely. Here is the complete list of ingredients in Red Vines:

Thus, these are the only ingredients that you will find in Red Vines. You may also find some other natural ingredients depending on the flavor.

What Are The Different Flavors Of Red Vines?

Red Vines come in a bunch of different flavors, all of which are vegan friendly. Here is a list of all the Red Vines flavors along with their ingredients:

The Red Vines Grape flavor contains the entire main ingredient along with blue 1.

Why Are Red Vines Considered Vegan?

Even if you’re not an expert on vegan-friendly ingredients, you can quickly tell that the ingredients in Red Vines are vegan. Wheat flour, sugar, corn starch syrup, and the rest of the ingredients do not have any links with animal cruelty. You will also not find any meat-based product in Red Vines.

However, if you’re someone who likes to maintain their health, you might need to keep an eye on the candy’s sugary ingredients.

These dyes do not have any links with animals, and as such, they are suitable for people who follow a strict vegan lifestyle. The food dye in Red Vines comes neither from nature nor derived from any natural source. And as such, it is considered an artificial ingredient. These artificial colorings are usually classified as yellow 5, yellow 6, red 40, and they all come from petroleum.

The red 40 dye present in Red Vine can also come from strawberries, a hybrid species of Fragaria. You will mostly find this dye in several other fast food and candies.

Red Vines Do Not Contain Gelatin

Gelatin is a type of protein that you get from collagen. It is only present in animals, especially in areas like skin, bones, and ligaments.

The primary purpose of gelatin is to create chewy textures in many food items. And for all the vegans out there, this may be a cause of concern since Red Vines are chewy. But fortunately, Red Vines do not contain any of that stuff, making it completely vegan friendly.

Red Vines instead uses wheat to give that chewy texture. Whenever you bite into a Red Vine, you will notice a texture that is similar to wheat. That texture is a sign that the food you’re eating does not contain any gelatin.

Red Vines Do Not Have Confectioner’s Glaze

One of the main reasons why most candies fall into the category of non-vegan-friendly is because they come with a confectioner’s glaze. If you’re wondering what this is, it is an ingredient used for adding an edible coating on candies. This thin coating acts as a protective barrier between moisture and gas.

The reason why the confectioner’s glaze falls under non-vegan is that it comes from insects. And as such, they fall under PETA’s list of non-vegan ingredients.

Supplies of confectioner’s glaze obtain their ingredient from a substance left behind by lac bugs called sticklac. While the source may seem okay, the process of obtaining them is not suitable for strict vegans. Thousands of bugs likely die while getting sticklac from the branches of the tree.

Generally, not all vegans are against this ingredient, but most vegans are not in favor of confectioner’s glaze as far as I’ve seen. But regardless of whether vegans accept this ingredient or not, you’ll be glad to know that Red Vines do not have this coating.

While Red Vines are not the healthiest food globally, it is still acceptable to treat yourself with this candy once in a while. If you ever have the urge to bite on something sweet and chewy, you can go for Red Vines without having to go overboard on your calorie consumption. Here are the nutritional facts on Red Vines:

Red Vines, regardless of its flavor, contains around 140 calories per 1.5 ounces of serving. A 1.5 ounce of Red Vines is four pieces of the original size candy.

If you want to control your calorie intake, you can quickly decrease it by taking only one strip at a time. An excellent way to keep up with this method is by sharing the rest of the candy strip with your friends.

The primary purpose of sugar in your body is to give you energy. And so it does not matter where the sugar comes from. It’s the same even if it comes from natural sources like fruit or Red Vines.

However, the only difference is that Red Vines do not have any health-promoting elements as fruits do.

Red Vines do not have fat in them, which is great news for vegans looking to maintain a zero fat diet. However, the protein content in Red Vines is also very low. While you need to consume the required amount of protein for your body to function properly, you don’t need to get the nutrient from Red Vines.

Red Vines do not contain any minerals or vitamins. However, they do come with a small amount of sodium.

However, a higher sodium intake can also lead to high blood pressure, so it is better to be on the safe side by consuming low sodium candy.

While sugar plays an essential role in your body, consuming it in large amounts is not acceptable. So, for anyone looking to control their sugar intake, you can also go for the sugar-free option Red Vines offers.

One serving of Red Vines’ sugar-free variant contains roughly about 25g of carbs, 90g of calories, 15mg of sodium, and 17g of maltitol.

This is also a good option for vegans who suffer from obesity or diabetes.

If you follow a strict vegan diet but love a good old candy once in a while, Red Vines are the perfect choice for you. Not only do they taste delicious, but they are also free from any non-vegan ingredients. So the next time when you’re in the grocery, don’t hesitate to put one in your grocery bag.

Red Vines also do not have any adverse effect on human health. While it does not have any health-promoting properties, you will also not degrade your health by chewing on them since they are relatively safe to chew. However, it does contain some artificial ingredients, so be sure to keep wary of them.