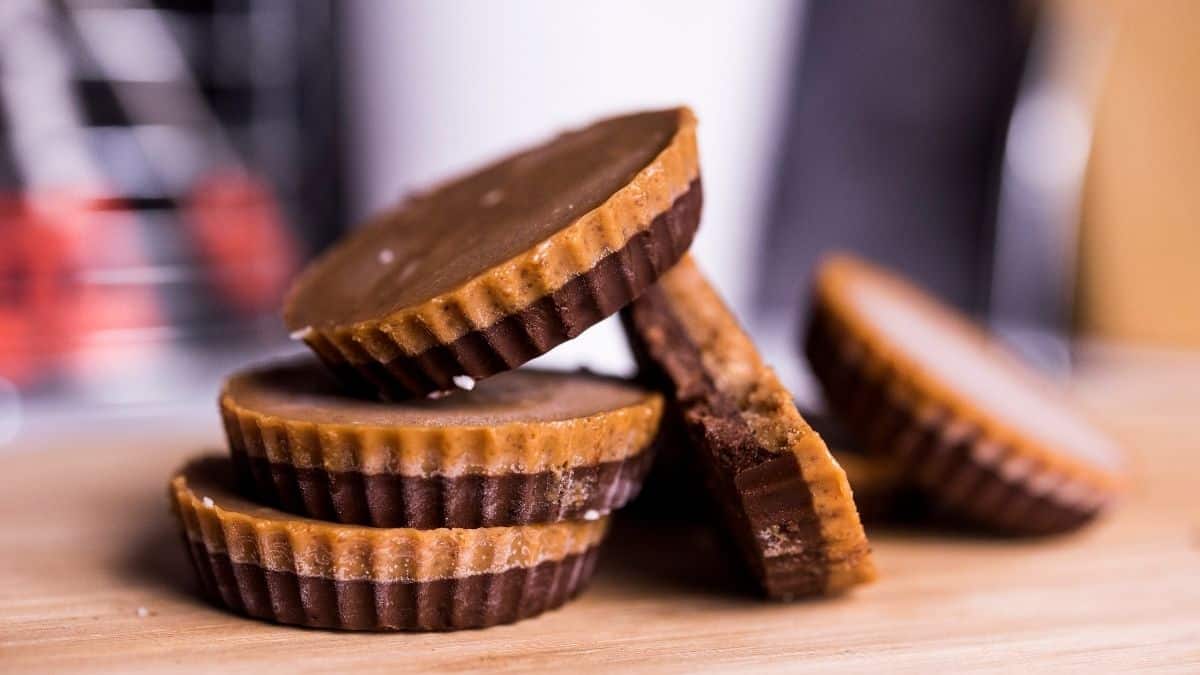 If you love chocolate and peanut butter, you can’t go wrong with Reese’s candy. The chocolate topped creamy peanut butter filling is a treat for many candy lovers. And so are some of the other Reese’s products, which are delicious treats. Looks and sounds vegan right? However, it might surprise you.

So the question to ‘Are Reese’s vegan?’ does not have a straight answer because most of their products are dairy products. And milk is an essential ingredient that does not come from a vegan source, so most of its products are non-vegan. However, some qualify as vegan.

As mentioned earlier, Reese’s have a wide variety of products, making it harder for you to distinguish the vegan from the non-vegan types. So to help you understand better, here are some of the non-vegan products you should know.

The peanut pieces by Reese’s is not a vegan product. And if you didn’t know about it, here is the reason. The Reese’s peanut pieces have whey and resinous glaze as ingredients.

Additionally, it also has many other non-vegan elements like palm oil, processed sugar, and artificial colors that are controversially known to contain non-vegan ingredients.

Reese’s Crispy crunchy is another non-vegan product because the primary ingredients are dairy products in milk, milk fat, whey, and non-fat milk. So they do not qualify as vegan products.

Despite the name, Reese’s peanut butter cups also do not qualify as vegan. And peanut butter is not the reason why. The problem is the addition of milk chocolate and other dairy products like non-fat milk and milk fat. And they also contain additional ingredients like processed sugar and palm oil.

Reese’s dark peanut butter cup is another non-vegan product. They also contain dairy products in the form of milk and processed sugars.

Reese’s NutRageous does not qualify as a vegan because it has a high concentration of whey protein, non-fat milk, and sodium caseinate, all dairy-based ingredients.

Reese’s sticks are another non-vegan product. And like most of them, it also has a high concentration of dairy products like milk fat, whey, and milk, including other elements like palm oil and processed sugars.

As you can see from the descriptions above, most of Reese’s products are dairy-based. And a significant chunk of their varieties is non-vegan. However, there is some good news. There are some vegan products that you can consume!

You might have thought you could not consume your favorite peanut butter flavor from Reese’s products. But Reese’s peanut butter sauce qualifies as a vegan product because you will not find any dairy products as one of the ingredients. However, if you are a strict vegan, palm oil is an issue. Nonetheless, if that is okay with you, there is no problem.

Reese’s peanut butter topping is another vegan product. There are no dairy products used, and it is safe to consume for vegans. However, the presence of processed sugar is a slight bother for strict vegans.

There are some controversial elements regarding whether some of Reese’s products are vegan or not. The use of dairy products is straightforward and understandable. However, things like palm oil and processed sugar create a problem because you never know the actual source from where they come.

An excellent example of processed sugar as a problematic ingredient for vegans is bone char in the factories. They come from animals, and it is used to filter out the crane sugar and give it a white appearance. And although it is not a direct non-vegan ingredient, most vegans take an issue because of its unethical use.

Bone char is derived from burning cattle bones at very high temperatures. It is a porous substance that acts as a sound absorbent of impurities, and it helps in filtering the brown cane sugar. It is just one of many possibilities on how processed sugars are made. And many vegans have their suspicion because most companies do not specify in detail the source of processed sugars. So this leaves you in a dilemma if you are a vegan.

Palm oil is another controversial product. In much the same way as processed sugar, it is considered non-vegan due to indirect sources. Palm oil is purely a plant-based product. However, it is obtained by cutting down plantations and clearing vast areas of land. And in the process, many animals are affected and often pushed to the brink of extinction.

So a significant issue with palm oil considered as a non-vegan product is deforestation. And the scale of it is in terms of vast acres of land, which often are non-replenishable. An excellent example to look at is Indonesia, where palm oil cultivation is a massive business.

How Healthy Are Reese’s Products?

You must know the health benefits or risk factors associated with the type of food you consume. The different varieties of Reese’s products have health benefits and certain risk factors that you need to know. Most products have high concentrations of artificial sugars, which are not safe when consumed in large quantities. If you keep eating Reese’s products to the point that you become an addict, the high sugar levels will put you at risk for diseases like obesity, heart problems, and diabetes. And these are severe health conditions.

To understand better, you should know that one packet of Reese’s product generally has about 21 grams of sugar, which is quite a healthy dose. So you get the basic idea of how much sugar you consume if you keep eating more than a packet regularly. Sugar only gives you excess amounts of calories, which have no benefits. Instead, it increases other adverse health problems like high blood pressure, tooth decay, and high blood lipids.

There are other ingredients that are not healthy for you. For example, most of Reese’s products have soy lecithin as an emulsifier and is considered an unhealthy element. Other ingredients include polyglycerol polyricinoleate, and tertiary butylhydroquinone, which extends the shelf life of these products. And because there is no research available on the possible harmful effects of these ingredients, it is a risk factor.

Therefore, the overall conclusion on whether Reese’s products are healthy is mostly no. Most of these ingredients are not fit for consumption, so avoid eating in excess.

However, despite all the adverse health effects, Reese’s products do have some health benefits. For example, it has some amounts of protein, which are essential for your health. Generally, a packet of Reese’s product contains about 5 grams of protein.

So are there any alternatives to substitute Reese’s products? There are quite a few. And they are healthier than Reese’s products, so you can still enjoy some of your favorite flavored snacks.

You can try the dark chocolate peanut butter cups by Justin’s. Compared to Reese’s, they have less concentration of artificial sugars and no preservatives. And the chocolate and peanut butter used is organic. So it minimizes all the health risks for you, and you can consume it without worrying much.

You can also try the Rawtella, which contains healthy ingredients like raw organic hazelnuts, coconut sugar, and cacao nibs, which are healthy foods. Simple Mills chip cookie mix is another excellent alternative containing vegan chocolate chips, almond flour, and coconut sugar. Coconut sugar is organic and much better compared to artificial sugars. They are safer to consume, as well.

If you love chocolate but don’t want o put your health at risk, Quinoa Dark Chocolate by Alter Ego is an excellent alternative. The chocolate comes from Quinoa, rich in proteins, and contains only about a third of the sugar you usually find on Reese’s chocolate products. And the best thing about it is they are purely vegan. So you don’t have to worry about the other ingredients on the product when you consume it. And you will also notice that it tastes much better than Reese’s, so that is another good reason to try them.

So there you have it. Despite Reese’s products being mostly non-vegan, you can always try some of these alternatives, which are a little healthier and vegan as well. It will also keep you safe from sugar-related diseases, which can have severe effects on your life.