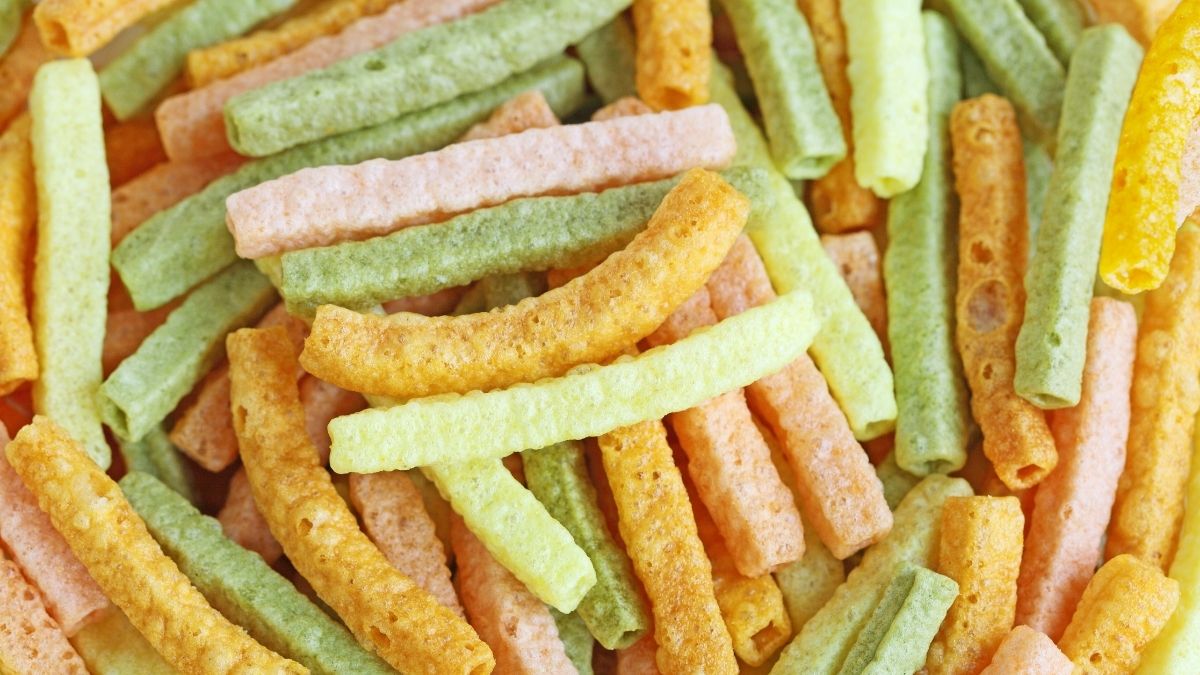 For beginners, the use of the term “veggie” in the mentioned meal item may have confused you. Veggie Straws, on the other hand, are not always vegan, as milk and natural colors are among the components. Some Veggie Straws are regarded as ideal for vegan snacking, while others should be avoided.

You may have Veggie Straws as one of your favorite snacks and want to know if they are vegan. The answer depends on the flavor you intend to consume. Some Veggie Straws flavors include milk and natural flavors, both of which are animal products.

What Are Veggie Straws?

Veggie straws are a crispy, salted packaged snack that is frequently linked to potato chips.

While there are other brands available, the original is Sensible Portions’ Garden Veggie Straws, Sea Salt, which was introduced in 2005.

They are a gluten-free, kosher product with no artificial flavors or preservatives and no ingredients derived from genetically modified organisms (GMO).

Are Veggie Straws Made Of Real Veggies?

They have been under scrutiny in recent years for not really having veggies in their chips, despite their marketing implying otherwise. Instead, they comprise the powder and around 40% dry potato. While they still have very little fat than some other chips on the market, they might not have been the healthy snack you think they are.

Are Veggie Straws Healthy For You?

Veggie straws are a well-known yet divisive packaged snack. They’re promoted as a nutritious snack, a fun way to eat veggies, and a superior substitute to potato chips.

Despite the fact that “veggie” is in the name, this snack may not be all that it’s cracked up to be.

The answer is, Veggie Straws, in general, are not a healthy choice. Consume them in moderation, like with many other non-nutrient-dense foods.

Despite the name, Veggie Straws are primarily made of vegetable powders and processed potatoes. They should not be used to replace your daily diet of entire greens. Consuming Veggie Straws on a regular basis may pose a risk owing to their high salt content. Excess sodium has been related to hypertension, a major risk factor for heart disease.

In reality, vegetable straws may be considered a deceptively unhealthy snack, defined as a product touted as healthy but containing little nutrients and being rich in fat, sugar, or salt. Despite the absence of true health advantages, marketing decisions on the front of the packaging, such as utilizing the term “veggie,” may induce customers to have a good attitude toward the product and be more eager to purchase it.

Given the popularity, this snack is not substantially different from other chips, which are heavily criticized for their low nutritional content. However, the quality of your total diet and other lifestyle variables have a significant impact on your risk of acquiring non-communicable illnesses such as heart disease.

As a result, it’s critical to keep a close eye on the quality of your nutritional intake and to enjoy exciting meals like vegetable straws in moderation.

Veggie straws are touted as a healthy alternative to potato chips, claiming to have 30% less fat.

But how does it match the Food and Nutrition Service (FNS) Smart Snacks guidance published by the United States Department of Agriculture (USDA)?

The table below gives information.

Overall, vegetable straws have low calories per serving but are not significantly different in terms of total fat and sugars when compared to the standard.

They have the greatest salt content and surpass the USDA’s FNS sodium guideline for Smart Snacks. Veggie straws were the only snack with no fiber and less than 1 gram of protein per serving.

Dietary fiber, the indigestible part of plant foods, is significant in lowering the risk of childhood and adult obesity, as well as several chronic diseases.

Knowing its contents should be a top concern if you don’t want to be misinformed.

In this sense, there are a lot of circumstances in which Veggie Straws should be avoided if you follow a vegan diet. Read on to find out.

Milk is obviously a non-vegan ingredient and there are a number of components in Veggie Straws that have milk. The following is a shortlist of milk ingredients you can find in the snack.

Vegan natural flavors are exactly as numerous as animal-derived natural flavors. As a result, determining whether the natural flavor used in this snack is vegan is difficult. As a vegan, you should always do your research and read the label when buying products.

Veggie Straws include various types of sugar, including cane sugar, a simple sugar, and dextrose. All three of these substances have the same issue. This is due to the presence of bone char.

The use of bone char in the bleaching is a significant element in sugar, making the product non-vegan.

Let’s have a look at some of the vegan flavors. The veggie straws come in a variety of flavors, but the one downside is that not all of them are vegan. There are various popular veggie straw varieties available on the market.

Let’s take a closer look at which flavors are vegan and which are not.

Unfortunately, certain kinds of veggie straws include dairy making them inappropriate for anyone who is lactose intolerant or lives a vegan lifestyle.

Other brands of vegetable sticks will be comparable as well. Avoid any Cheddar, Sour Cream, or Ranch tastes since they usually include milk, making them inappropriate for vegetarians and lactose-sensitive people.

What Oil Do Veggie Straws Use?

Don’t be alarmed. Veggie Straws do not include any palm oil. Canola, sunflower, and safflower oils are used in the preparation of these snacks, but not palm oil.

It is acknowledged that you use precaution when dealing with this supposedly plant-based greasy substance. Palm oil farming has destroyed thousands of acres of tropical rainforests, endangering several animal species that are forced to seek refuge in locations where they are not welcome and are frequently hurt. Due to a scarcity of food and natural resources, these species are rapidly approaching extinction, and palm oil plantations are simply growing wider and greater as a result of our unrelenting consumption. It is critical to accept responsibility and put a stop to the usage of palm oil wherever and whenever feasible.

There are several vegan chips available! Vegan chips are included in the list below for you to get your fingers into.

Please keep in mind that this is not a complete list! Nowadays, vegan flavored, salted crips are available from a variety of manufacturers. Read the ingredients list on the product label.

Packaged snacks, such as veggie straws, are not the best approach to satisfy your daily vegetable requirements.

If you find Veggie Straws not vegan enough for you, here are some quick and easy homemade veggie snacks:

Veggie Straws aren’t healthier than any other package of chips on the shelf.

The name Veggie Straws leads you to believe they are a healthy alternative, and you end up eating more of them than you would with any other snack. Be careful, there aren’t many veggies in there. The only role that veggies serve in Veggies Straws is to give color.

It’s a tasty snack that may be savored in moderate amounts, but should not be used in place of your usual diet of entire veggies.