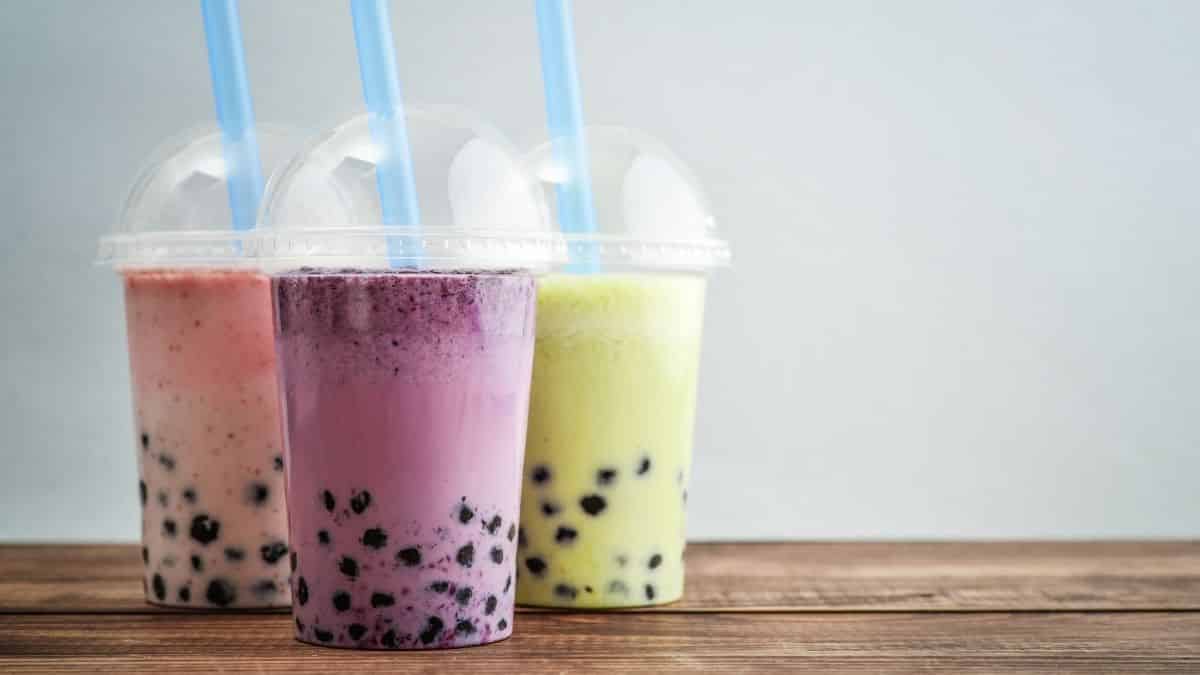 Answer: It depends. Boba tea can be both vegan and non-vegan. It depends on how you order it.

This tasty drink originating from Taiwan has quickly become one of the most popular beverages in the world. And believe me, it’s incredibly addictive. You’ll find it almost everywhere in Northern America despite originating from South East Asia. Due to its growing popularity, it is also considered the “Asian Starbucks.” However, a lot of people are now questioning whether this addictive drink is vegan or not. If you also want to if this drink is vegan-friendly, check out my answer below.

What Is Boba Tea Or Bubble Tea?

Boba tea, also known as bubble tea, is a famous Taiwanese drink having milk tea and tapioca-type balls as its main ingredient.

So, why is this drink called bubble tea? Initially, the tapioca balls were relatively small, being just about the size of a pea. However, a tea shop owner later experimented with much larger balls and used the word bubble tea for its name.

Hence the drink came to be known as bubble tea or boba tea.

A Quick History Of Boba Tea

Boba tea was first developed back in the 1980s by two Taiwanese friends Liu Han Chieh and Lin Hsiu Hui, in Taiwan. The idea of mixing milk with tea struck Lin Han Chieh after seeing how the Japanese people were making their coffee. The development of this new type of tea made them very popular. Lin Hsiu Hui, who acted as the product manager back in the day, was the one who created those unique pearls that you now find in your cup of boba. The pearls are a combination of sweetened pudding and tapioca ball.

Since then, boba tea has become one of the most popular drinks in the world. It has spread from a small Southeast Asian country to all corners of the world.

What Makes Boba Vegan Or Non-Vegan?

You might be wondering if boba is vegan or not. And if you’re a vegan, can you drink it? Let’s find out.

Bubble tea is extremely versatile, and for that reason, it can be both vegan and non-vegan. But to drink a vegan-friendly boba tea, you might have to skip the boba pearls (aka tapioca pearls). It is because most stores in the US sweeten the pearls with non-vegan ingredients like honey. If you’re a vegan, you will also want to avoid the topping made of pudding. Pudding consists of non-vegan ingredients like eggs, so you should be careful with that. But don’t be disappointed just because you can’t go for this topping.

Boba tea also comes in various toppings, which are vegan-friendly as well. Some of the toppings you can choose as a vegan are rainbow jelly, lychee jelly, and several other jelly forms. These jellies do not include animal products and only contain fructose, sugar, and other ingredients.

If you don’t want to miss out on the pearls, you can also opt for grass jelly, which is quite similar to tapioca pearls. Note that some stores also use honey on jelly, so make sure to ask beforehand.

Another significant ingredient in boba tea, which is non-vegan, is milk. However, that does not mean you can’t have boba tea. There are several alternatives for milk that you can ask for, such as soy milk and almond milk. If you’re not a fan of those milk, you can skip out on milk as well.

What Makes Boba So Special?

There are several reasons why boba is so famous these days. Here are a few points on what makes boba special:

One of the main reasons why boba tea is so special is because of its unique taste. The unique taste of boba comes from the excellent combination of chewy tapioca balls and sweet tea.

Usually, with most drinks like juice and coffee, you’ll always find a similar texture, which can be boring if you drink many beverages. However, with boba, you will get a unique consistency, which will give a sort of break from the same old drinks. You probably won’t find a drink that tastes the same as boba.

Several Options To Choose From

With other drinks and beverages, you won’t usually find a lot of options to choose from. While it would be unfair to say that drinks don’t usually come with options, I can confidently say that none of them ever comes close to boba in terms of variation.

Some of the most popular flavors of boba include strawberry matcha, chocolate, and many more. At some boba foodchain, you will find a series of salted cheese drinks as well.

Besides the ton of flavors you can choose from, you will also find several toppings in boba. These toppings can be in the form of cream, jelly, aloe vera, chia seeds, and popping boba.

Now to see how many different boba drinks are there, let’s do some quick math. Suppose a boba shop has around 30 different flavors and 10 different toppings. When you multiply those options (30×10), you’ll see that boba from a particular store can have roughly 300 different boba variations. That is a lot, and no other drink ever comes close to the number of boba variations. It is one of the best drinks to have if you’re looking for some adventure. Additionally, the tons of options can also let you pick a vegan drink that fits your lifestyle.

There’s no denying that boba is one of the most delicious drink in the world. But the taste alone is not the reason why it has become so famous. Part of the reason for its popularity is because of the aesthetic appeal. Most people buy the drink to post it on their favorite social media platforms like Instagram. But you can’t blame them either when the drink comes in a bunch of color schemes like blue galaxy boba, cotton candy boba, and light bulb boba.

While boba tea is one of the most delicious drinks, it does not have many health benefits. The high calorie and carbohydrate content may provide you with a little boost in your energy levels, but usually, boba tea comes with many sugars. This can lead to several health issues in the long term, like obesity and diabetes.

But thanks to tea present in the drinks, you can enjoy certain health benefits by drinking boba tea:

According to some studies, drinking green tea can be a great way to lower your cholesterol and blood pressure levels. This reduces the risk of several health conditions, like stroke and heart disease. Fortunately, boba tea also comes with green tea making it an excellent beverage for lowering the risk of heart diseases.

Green tea has also shown a positive impact on certain types of cancer. In a recent study on the antioxidants of green tea, researchers found that green tea can lower the risk of many types of cancer, including prostate, colorectal, breast, and liver cancers.

While these health benefits are undoubtedly beneficial, it is essential to note that green tea is not always the base for most boba tea. So whether you benefit from drinking boba tea mainly depends on your choice of flavor.

Some of the risks are:

If you’ve ever tried boba before, you know that it contains a lot of sugar. This high level of sugar can cause serious health issues if you drink it regularly. You might suffer from obesity and also cardiovascular disease.

Since boba pearls are mainly made of cassava, you might experience some allergic reactions if you are allergic to root vegetables. You should also avoid it if you have latex allergies.

How Can You Make Your Boba Healthier?

While it is usually relatively safe to consume boba as long as you’re drinking in moderation, there are several ways you can make your boba much healthier:

Since high sugar consumption comes with several complications, it is best to lower the amount of sugar you add to your drink. Your boba will naturally become less sweet. However, you will still be able to enjoy the flavor of boba tea.

If you’re allergic to dairy products, you can go for soy milk, coconut milk, or almond milk. These alternatives are much healthier and also come with a lot of benefits.

The toppings in boba tea also contain a lot of sugar. So if you want to cut down your sugar intake, you can lower the amount of topping in your drink or simply add none at all. This will make your drink healthier by a considerable amount.

As you can see, Boba tea is not vegan by default. However, with several customizations available, you can undoubtedly make it vegan-friendly so that you can enjoy a cup of boba tea yourself. Keep in mind that boba tea ingredients differ from one store to another, so make sure to look at their list of ingredients.